TO A COVETOUS FRIEND
The Covetous hath all himself, not giving:
He nothing hath Himself, but wants while living.

Source: John Owen (c.1564-c.1628), Epigrammata, 4.205, with an English translation by Thomas Harvey. Meter: Elegiac. Like many epigrams, this one is based on paradox. In the first line, Owen states that the stingy man selfishly keeps what he has all to himself (avarus solus habet quod habet), i.e. he does not give anything to a friend (nil donat amico) - that is the standard definition of a miser. Since Owen has addressed the poem to a "stingy friend," presumably he is alluding to the fact that this man will not give anything to his friend Owen in particular! Then, in the second line, we get the paradox: the miser is not even a friend to himself (nil sibi dat), and as a result he is so selfish that he does not even have what he has (solus non habet hoc, quod habet). The miser paradoxically has - and does not have - as a result of the fact that he is unable to share his wealth, even with himself! Although he has many possessions, his stinginess makes his having the same as not having. I thought this was a very fitting epigram for Open Access Week; find out more about that at the Open Access Week website. :-) 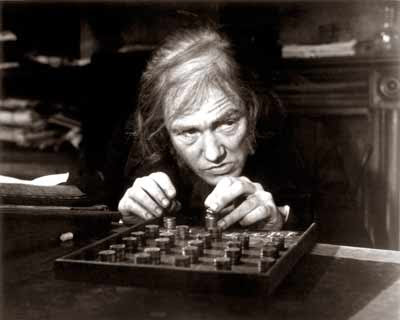 (Albert Finney as Scrooge)
Posted by Laura Gibbs at 12:01 AM

Email ThisBlogThis!Share to TwitterShare to FacebookShare to Pinterest
Labels: DCC1, Illustrated, Owen
Newer Post Older Post Home
Welcome to the companion website for my latest book, Brevissima: 1001 Tiny Latin Poems. I hope you will enjoy browsing the site! Here is an INDEX PAGE with links to all 1001 poems. You can get a printed copy of the book from Lulu.com and/or you can download a complete PDF copy for free here. I'm also keeping an errata list here; if you notice anything I should add to the list, let me know.