Here is today's distich by John Owen, with an English translation by Thomas Harvey, 4:7. It is a wonderful play on mathematics, comparing the infinite number of radii in a circle to what Owen believed to be the one true way to heaven provided by religion. I think it is fascinating how, just like the "Tao of Physics" crowd in our day (a crowd to which I avowedly belong), Owen was turning to the math and science of his time to find metaphors for spirituality. Owen uses the circle as a counter-example here, contrasting the infinity of the circle with a single faith. In a more pluralistic society like the one we live in today, we would be more inclined to take it in the opposite way: just as there are an infinite number of radii in a given circle, so there are an infinite number of spiritual paths we might traverse in order to get to that great circle. For the poem's vocabulary, see the bottom of this blog post.

FROM THE CENTER TO THE CIRCUMFERENCE
Not from the Center to th’ Circumference
Sole one Line’s, yet but one way t’ Heaven’s hence.
Here is the vocabulary:
a - from
centrum - center
ad - to, towards
circumferentia - circumference
circus - circle, orbit
non - not
unicus - single, unique
linea - line
duco - lead
terra - earth
coelum (caelum) - heaven
fero - carry, bear, go
tamen - however, but
unus - one
via - road, way 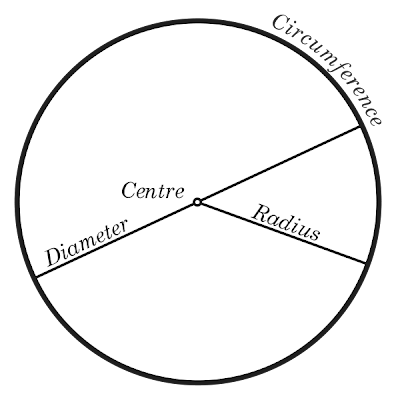