Here is today's distich by John Owen, with an English translation by Thomas Harvey, 4:214. The poem refers to a famous incident from the folkloric Life of Aesop, when Aesop's master tells him to serve the best food for every course at a feast; Aesop serves a dish of tongues for the first course, and tongues for the next course and then tongues again. When his master challenges him, Aesop explains that the tongue is the best thing because of all the good things that can be accomplished through the power of human language. Frustrated, his master orders Aesop to do just the opposite for the next feast; he asks Aesop to serve the worst food. Again, Aesop brings out a dish of tongues, and then tongues for the next course, and tongues again. His master is enraged, but Aesop then explains about all the dreadful things that are brought about as a result of human language. So Aesop proved that the human tongue is the best thing and the worst, too.


AESOP’S TONGUE
No Member is, that doth to man belong
More Noble, or Ignoble, than the Tongue.

The vocabulary is keyed to the DCC Latin Vocabulary list. There are three words which are not on the DCC list: 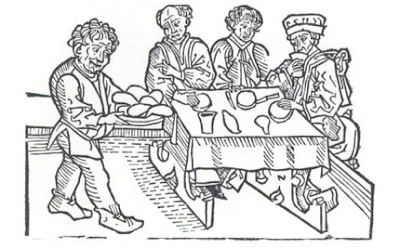