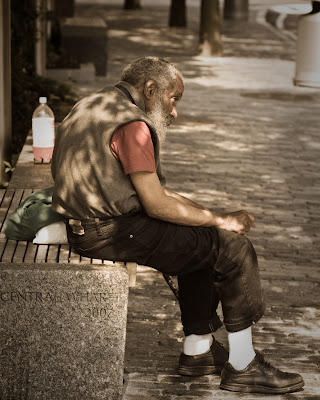 Here is today's distich by John Owen, with an English translation by Thomas Harvey, 4.228. The title of the epigram refers to the Ubiquitarians, also known as Ubiquists, who were a Protestant movement of the late 16th century. The name comes from a theological dispute regarding the presence of the body of Christ in the Eucharist. Melanchthon argued that the Eucharist was everywhere, and since a body cannot be in many places at once, the body of Christ could not be in the Eucharist. Johannes Benz, the founder of Ubiquitarianism, maintained that body of Christ had been deified and was therefore everywhere, including in the ubiquitous Eucharist. You can read more about the Ubiquitarians at this Wikipedia article. Owen's poem is not about theology, at least not directly - instead, he is focusing on the paradox that the homeless man is at home everywhere, in the sense that he has no actual home of his own - and, not having a home, he cannot be exiled from it. In a world of gross inequality, the poor are everywhere, like the body of Christ.

UBIQUITARIES
All th’ Earth’s before the poor, where e’re he roam
He’s never exil’d, ever is at home.
Vocabulary: