Here is today's distich by John Owen, with an English translation by Thomas Harvey, 7.4. The specific art of memory mentioned here is the so-called "loci," based on the spatial relationship between places, so that you associate the items you want to remember with a corresponding set of places. As you walk from once place to the next, you can advance through the items in the list; you can read more about the "loci" at Wikipedia. The ancient Greek poet, Simonides, was supposedly the inventor of this technique, which is connected with an anecdote about Simonides contained in an Aesop's fable: when the dinner guests at a banquet were crushed in the collapse of the dining hall, Simonides was able to identify their remains based on where people were sitting; Simonides, meanwhile, had escaped death through the kindly intervention of the gods Castor and Pollux.


THE ART OF MEMORY
Simonides invented Mem’ries Art,
But th’ Art of Wit none yet, in whole or part.


The vocabulary is keyed to the DCC Latin Vocabulary list. There are only two words in this poem that are not on the DCC list: 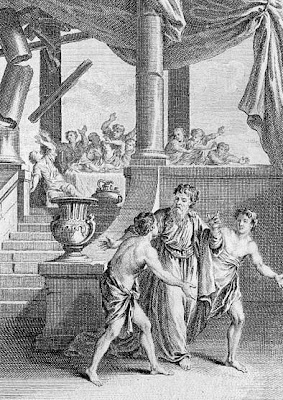