Here is today's distich by John Owen, with an English translation by Thomas Harvey, 7.19. I love the word play here with suadet and sua det. There's really nothing Harvey can do in the English to match that! For the image, I chose Saint Martin of Tours, who famously cut his cloak in half to share it with a man who had no clothes.

EXAMPLE
Vertue by good Example’s taught and learn’d:
In teaching me, my Teacher is concern’d.

atque, ac: and in addition, and also, and; (after comparatives) than; simul atque, as soon as
bene: well
disco -ere didicī: learn
do dare dedī datum: give
doceo -ēre -uī doctum: teach
ego me mihi mē: I, me
pauper -eris: poor, lowly
qui, quae, quod: who, which, what; quis quid: who? what? which?
suus -a -um: his own, her own, its own
virtūs -ūtis f.: valor, manliness, virtue 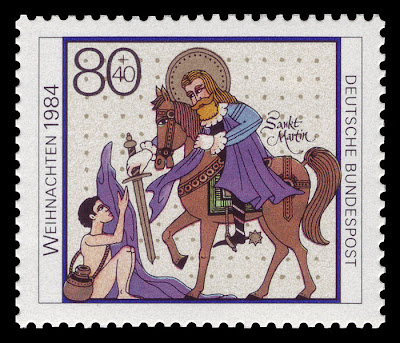