Here is today's emblem and distich by Gabriel Rollenhagen, Book 1.82, with an English rendering by George Wither. The opening stanza of Wither's poem explains some of the details you can see in the emblem:


When, on this Child-like-figure, thou shalt looke,
Which, with his Light, his Houre-glasse, and his booke,
Sits, in a watching-posture, formed here;
And, when thou hast perus'd that Motto, there,
On which he layes his hand; thy selfe apply
To what it counselleth; and, learne to die,
While that Light burnes, and, that short-houre doth last,
Which, for this Lesson, thou obtained hast.

If you look at the words written on the child's open book, they say: DISCE MORI. 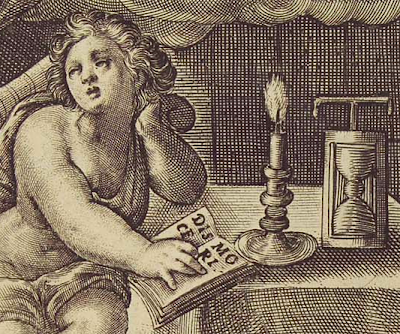 
Death's one long-Sleepe; and, Life's no more
But one short-Watch, an houre before.

The vocabulary is keyed to the DCC Latin Vocabulary list. There are only three words in this poem that are not on the DCC list:

Email ThisBlogThis!Share to TwitterShare to FacebookShare to Pinterest
Labels: DCC3, Illustrated: Emblems, Rollenhagen
Newer Post Older Post Home
Welcome to the companion website for my latest book, Brevissima: 1001 Tiny Latin Poems. I hope you will enjoy browsing the site! Here is an INDEX PAGE with links to all 1001 poems. You can get a printed copy of the book from Lulu.com and/or you can download a complete PDF copy for free here. I'm also keeping an errata list here; if you notice anything I should add to the list, let me know.