This is my ninth "Latin without Latin" essay. For background and a link to other essays, see this page: About the English Essays. In the classical tradition, Martial is the most famous author of Latin epigrams, including many distichs! You can read more about Martial and his poetry at Wikipedia. This is his little poem about the proverbial "swan song" (a phrase we use in English even today); according to the ancient legend, known to both the Greeks and the Romans, the swan does not sing until the moment of its death.

Here is how the poem is put together:

Dúlcia. This from the Latin word dulcis, meaning sweet (compare the English word dulcet). This is the neuter plural form, either nominative or accusative case, so we don't know yet if it is the subject or the object of the verb.

defécta. This is from the Latin word deféctus, meaning faulty or defective. Thanks to the meter of the poem (you'll have to trust me on that), this is a feminine ablative singular form with a long final vowel: deféctā. So we've started off with two adjectives, the neuter plural dúlcia and the feminine singular defécta in the ablative case. We need some nouns now, and a verb, too!

modulátur. Here is our verb, modulári, meaning to dance, sing or play a musical instrument. It is third-person singular: he or she or it plays. That gives us the verb we needed for both our adjectives: dúlcia defécta modulátur - (someone or something) plays sweet (things) with a defective (something). We can keep reading on to get a better idea of what is going on exactly.

cármina. This is from the Latin word carmen, meaning song (this is actually the origin of the English word charm). It is a neuter plural, so it goes with the adjective dúlcia, giving us: dúlcia cármina, sweet songs.

lingua. This is from the Latin word lingua, meaning tongue (compare the English word language). This is the feminine ablative noun we need to go with defécta, giving us: defécta linguā, with a faulty tongue, by means of a defective tongue. (The ablative case in Latin often expresses the idea of the tool or instrument that is used to do something.)

So, we have a complete statement in the first line of the poem, even though there has been no mention of the swan yet: Dúlcia defécta modulátur cármina lingua, it sings (modulátur) sweet songs (dúlcia cármina) with its defective tongue (defécta lingua).

Notice also that the words are nicely interwoven around the verb at the center: Dúlcia defécta modulátur cármina lingua. Meanwhile, in the second line we'll surely find a mention of the swan itself!

cantátor. The Latin noun cantátor means singer, from the verb cantare, to sing. (compare the English word chant). The noun is in the nominative case, so it is the subject of our verb: cantátor modulátur, the singer sings.

cycnus. At last, the Latin word for swan, sometimes spelling cycnus and sometimes cygnus. (Compare the English word cygnet, meaning a young swan.) As you can see from the letter "y" (not a letter in the Roman alphabet), the word is actually Greek. The native Latin word for swan was olor, but the word cycnus was widely used in Latin. So now we have the swan, cycnus, who is a singer, cantátor.

fúneris. This is from the Latin word funus, meaning funeral. It is the genitive singular form, meaning of a funeral. This genitive noun goes with the noun we saw earlier, cantátor - so the swan is the funeral singer, cantátor fúneris. Notice how this noun phrase wraps elegantly around the word swan: cantátor cycnus fúneris. (This style of word wrapping is pretty much impossible in English, but it is a hallmark of Latin style, both in poetry and in prose.)

ipse. This is a wonderful little Latin word that provides extra emphasis to a noun, something like saying "itself" in English. The form is masculine singular, agreeing with cycnus, the swan. Here it emphasizes the cycnus, the swan, creating a double-nested phrase: cantátor cycnus fúneris ipse, the swan itself (cycnus ipse) a funeral singer (cantátor fúneris).

sui. This is from the Latin word suus, a reflexive possessive pronoun that refers back to the subject of the verb. It is the genitive singular, agreeing with fúneris, so we have the phrase fúneris sui, "its own funeral." The entire second line is interwoven, as you can see: cantátor cycnus fúneris ipse sui, the swan itself is its own funeral singer!

Now put it all together, with the verb in the first line and the subject in the second line, a word order we cannot imitate in English but which comes easily in Latin, not to mention all the lovely interweavings of the noun phrases:

For more of Martial's poems in Latin, you can visit the Martial stream in my Latin distichs blog, and here is a link to the blog post for this specific poem. As I add new English essays, you will be able to find those in the English stream at the blog. The next essay is about Venus, the goddess of love: Vincere Venerem. 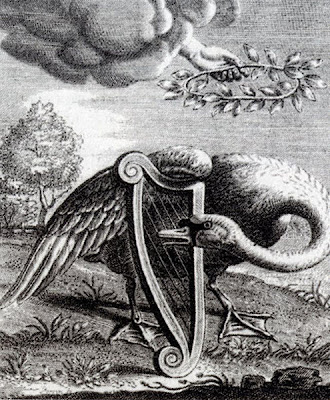 Email ThisBlogThis!Share to TwitterShare to FacebookShare to Pinterest
Labels: English, GPlusNo, Illustrated, Latin Without Latin, Martial, noDCC
Newer Post Older Post Home
Welcome to the companion website for my latest book, Brevissima: 1001 Tiny Latin Poems. I hope you will enjoy browsing the site! Here is an INDEX PAGE with links to all 1001 poems. You can get a printed copy of the book from Lulu.com and/or you can download a complete PDF copy for free here. I'm also keeping an errata list here; if you notice anything I should add to the list, let me know.