Latin Without Latin: In Mortis Diem

This is my sixth "Latin without Latin" essay. For background and a link to other essays, see this page: About the English Essays. I promised Brennus Legranus (whom some of you might know from the LatinTeach listserve) to include one of the distichs of Sir Thomas More who, among his many achievements, was an accomplished Latin poet. I have some notes about Thomas More at the Disticha Latina blog. The poem is entitled In Mortis Diem Ómnibus Incértum - and here is the poem:

Let's start with the title:

In. This means just what you would expect: in, or into. It is commonly used in titles to mean about, regarding - and with that meaning it takes the accusative case, so we are waiting for an accusative noun in the title.

Mortis. This is from the noun mors, meaning death (compare the English word mortality). The form is genitive singular, meaning of death (compare the Latin phrase rigor mortis). So, as this word is in the genitive case, we are still waiting for our accusative noun to go with the word in.

Diem. This is from the Latin word dies, meaning day - and it is the accusative form we were looking for (compare the Latin phrases per diem, ante meridiem, post meridiem). So now we have a complete phrase: In Mortis Diem, regarding the day of death. But there is more to come in the title of the poem.

Ómnibus. This is from the adjective omnis, meaning all, every (as in many English compounds omnivore, omniscient, etc.). Here the form is plural, meaning all persons, everyone. The case is either dative or ablative; we will have to wait to find out which.

Incértum. This is from the adjective incertus, meaning uncertain, unknown, undetermined. The form agrees with mortis diem, the day of death - which allows us to put the whole phrase together: in mortis diem, ómnibus incértum, regarding the day of day, which is unknown to all.

So, now we have the subject of the poem; it will be about the day of death which is known by no one - In Mortis Diem Ómnibus Incértum. You might note the nice play on words that allows the last word of the title to echo the first word: In Mortis ... Incértum.

Now let's see what the poem itself says about that day of death:

Fleres. This is from the Latin word flere, to weep. It is a form called the imperfect subjunctive which is able to express what is called a "contrary to fact condition" in Latin - you would be weeping (but you are not weeping; that is the contrary-to-factual part of it).

si. This is the Latin word that means if. Fleres si... You would be weeping if...

scires. This is from the Latin verb scire, meaning to know (which gives us the English word science). It is also in the imperfect subjunctive form: Fleres si scires, you would be weeping (but you are not) if you knew (but you do not know)... but if you knew what?

unum. This is from the Latin word unus, meaning one (compare the English words unit, unify, etc.). But one what? The form is masculine or neuter singular, but we do not know yet what it refers to.

tua. This is from the Latin word tuus, meaning your (from the pronoun tu, meaning you). This form is feminine singular or neuter plural - again, we do not know yet what it refers to, but it does not refer to the same thing as unum, which is masculine or neuter singular. So we are waiting on two nouns to resolve this intricate pattern of words.

témpora. This is from the Latin word tempus, meaning time or season (compare the English word temporal, contemporaneous, etc.). It agrees nicely with tua, so now we have a noun phrase: tua témpora, meaning your times, your seasons. We've almost got the whole thing now: Fleres, si scires unum tua témpora... You would weep if you knew your lifetime was one ... what?

mensem. This is from the Latin word mensis, meaning month (compare the English word menstruation). The noun is masculine and in the accusative case, so it goes with unum, giving us the noun phrase: unum mensem, one month. As often in Latin poetry, the one phrase is wrapped around another phrase in a little package: unum tua témpora mensem.

But you do NOT know that... you cannot know it! It's a contrary to fact condition because, as the title tells us: mortis dies ómnibus incértus, the day of death is not known to anyone.

Rides. This is from the Latin verb ridere, meaning to laugh (compare the English word ridiculous). This time the form is not subjunctive; it is a present tense verb in the indicative mood, second-person singular: rides, you are laughing. This is not a contrary-to-fact situation; you really are laughing!

una dies. Here you have the subject of the verb: una dies, one day.

As an illustration, here is a famous painting of a skull with tulip and hour-glass by Philippe de Champaigne - and as I add new English essays, you will be able to find those in the English stream at the blog. I've added a new essay with a poem by Georg Fabricius: Prudentia. Have you ever thought about the etymology of the word "prudence"...? This little poem will make that etymology impossible to forget. 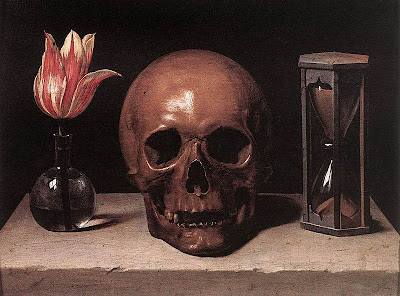 Email ThisBlogThis!Share to TwitterShare to FacebookShare to Pinterest
Labels: English, GPlusNo, Illustrated, Latin Without Latin, More, noDCC
Newer Post Older Post Home
Welcome to the companion website for my latest book, Brevissima: 1001 Tiny Latin Poems. I hope you will enjoy browsing the site! Here is an INDEX PAGE with links to all 1001 poems. You can get a printed copy of the book from Lulu.com and/or you can download a complete PDF copy for free here. I'm also keeping an errata list here; if you notice anything I should add to the list, let me know.