This is my seventh "Latin without Latin" essay. For background and a link to other essays, see this page: About the English Essays. This particular poem is from a collection of distichs by Georg Fabricius, Poetae Singulis Distichis Descripti, published in 1546. As the title reveals, the book contains distichs which describe various poets, but there are also distichs on other topics, too, such as the Muses, the Sibyls, and the Virtues. This particular distich is from the series describing the four virtues: Iustitia (Justice), Fortitudo (Bravery), Temperantia (Moderation), and Prudentia (Prudence).

As often with Latin words in English, the English word prudence has a kind of stilted quality that is not true of the Latin word itself. The word prudence does have a positive sense, but it is a vague and hazy positive quality. There are other ways to translate Latin prudentia into English, though, such as good sense or wisdom. The best translation is probably foresight, based on the etymology of the Latin word itself. Prudentia is a contraction of the word pro-videntia, fore-sight. (The Latin word providentia is what gives us the word providence, too, of course.)

For the purposes of reading the poem, the etymology of the word prudentia will come in very handy, in fact! Here is the poem:

Ingéniis. This is from the Latin word ingenium, which means nature, character, talent (compare the English word ingenuity). It is literally something in-born, in-gen, in you, your innate ability. The form is either dative plural or ablative plural, but we don't know which yet.

addo. This is from the Latin verb addere, to add (literally ad-dere, to give in addition to something else). It is in the first-person singular, "I add." But who is speaking? We don't know yet! Now, though, we can be fairly certain that the word ingéniis is in the dative plural: I give to people's inborn talents... what? We need an object for the verb!

lucem. This is from the Latin word lux, light (as in the famous Latin phrase fiat lux, let there be light). It is in the accusative case, lucem, which gives us the object of our verb: Ingéniis addo lucem, I add light to people's inborn talents. But who is speaking? We still don't know.

cernens. This is from the Latin verb cernere, to see, to discern. The form is a present active participle, seeing, in nominative singular form, agreeing with our subject, Foresight. It makes sense that Foresight would be able to see things! But what things does she see? We will need the second line of the poem to find out.

Quod. This is the Latin relative pronoun, qui, in the neuter singular form - (that) which. Foresight sees that which... what? We need to keep reading.

fuit. This is from the Latin verb, esse, to be, in the past tense. It is third-person singular, which is just what we want: Prudence sees quod fuit, that which was.

atque. This Latin word means and. Can you guess what else Prudence sees?

quaeque. This is a compound word in Latin: quae plus que. The little particle que means and. The word quae is again the relative pronoun, this time in the neuter plural form: Foresight sees that which was, that which is, quaeque, and those things (plural) which... what? You can probably guess - what would go with the past and the present?

futúra. You can see that this Latin word gives us the English word future. Technically, the word futúra is a future active participle, neuter plural, from the verb esse, to be, and it means "things that will be." In other words: the future. Now we just need a verb: Foresight sees the things which, quae, the future, futúra ... what?

trahunt. This is from the Latin verb trahere, to drag, haul, bring (it gives us the origin of the English word tractor!). It is in the third-person plural, which is what we want for futúra to be the subject. So now we have the second line of the poem, which tells us all the things that Prudence (or Foresight) can see: Quod fuit, that which was, atque quod est, and that which is, quaeque futúra trahunt, and those things which the future is bringing.

Here is the whole poem again:

Georg Fabricius is not a famous Renaissance poet, but I think this little poem of his is well worth remembering! I hope you enjoyed it and as I add new English essays, you will be able to find those in the English stream at the blog. The next essay is about a poem of Michele Verinus: Ne Simus Loquaces. 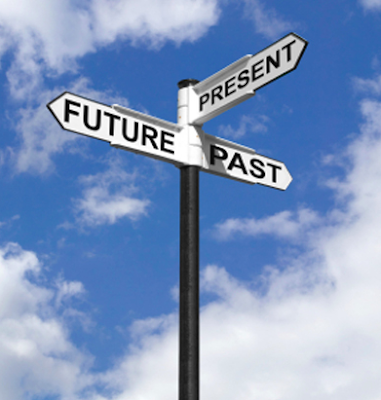 Email ThisBlogThis!Share to TwitterShare to FacebookShare to Pinterest
Labels: English, Fabricius, GPlusNo, Illustrated, Latin Without Latin, noDCC
Newer Post Older Post Home
Welcome to the companion website for my latest book, Brevissima: 1001 Tiny Latin Poems. I hope you will enjoy browsing the site! Here is an INDEX PAGE with links to all 1001 poems. You can get a printed copy of the book from Lulu.com and/or you can download a complete PDF copy for free here. I'm also keeping an errata list here; if you notice anything I should add to the list, let me know.