Here is today's emblem and distich by Gabriel Rollenhagen, Book 2:13, with an English rendering by George Wither. Here are Wither's comments on the symbolism of the image:


Exalt thou not thy selfe, though, plac'd thou be,
Vpon the topp of that old Olive-tree,
From whence the nat'rall branches prun'd have bin,
That, thou, the better, mightst be grafted in.
Be not so over-wise, as to presume
The Gard'ner, for thy goodnesse, did assume
Thy small Crab-Olive, to insert it, there,
Where, once, the sweetest-berries, growing were:
Nor let thy Pride those few old-boughes contemne,
Which, yet, remaine upon their ancient Stemme;
Because, thy new-incorporated Sprayes,
Doe more enjoy the Sunnes refreshing raies:
But, humbled rather, and, more awfull bee;
Lest, hee that cut off them, doe breake downe thee.

This tradition of the olive tree emblem and the motto "Noli Altum Sapere" goes back to the scholar Robert I Estienne, famous for having printed a Bible with verse numbers. For purposes of comparison, here is one of Estienne's emblems: 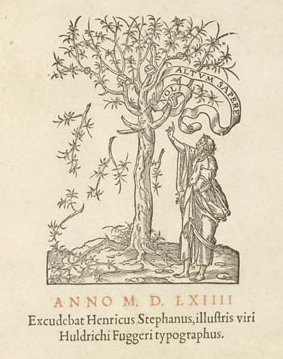 
Above thy Knowledge, doe not rise
But, with Sobrietie, be wise.

fas - divine command, that which is allowed
sapiō sapere sapīvī: be wise

Email ThisBlogThis!Share to TwitterShare to FacebookShare to Pinterest
Labels: DCC2, GPlusNo, Illustrated: Emblems, Rollenhagen
Newer Post Older Post Home
Welcome to the companion website for my latest book, Brevissima: 1001 Tiny Latin Poems. I hope you will enjoy browsing the site! Here is an INDEX PAGE with links to all 1001 poems. You can get a printed copy of the book from Lulu.com and/or you can download a complete PDF copy for free here. I'm also keeping an errata list here; if you notice anything I should add to the list, let me know.