This is my twenty-third "Latin without Latin" essay. For background and a link to other essays, see this page: About the English Essays. It's been a while since I posted a John Owen poem and, since he is probably my favorite writer of distichs, I have chosen an Owen poem for today (more about Owen here). Owen's poems almost always involve paradox, and this one is about the paradox of monotheism and polytheism. Here is the poem:

Now let's see how it works:

Cóndidit. This is from the Latin verb condere, meaning to put together, to build, establish, create. The form is past tense, third-person singular: (someone) built, created (something). We are waiting on both a subject for our verb and also the object.

in terris. Here we have the Latin preposition in together with the word terra, meaning earth or land (compare the English word terrestrial), in the plural form. Put them together and you have in terris, in the lands, on the earth. (In Latin, the standard way to refer to the whole world, the earth as a whole, is orbis terrarum, the circle of the lands, plural.)

hóminem. This is from the Latin noun homo, meaning person, man (as in the phrase homo sapiens). Here the form is accusative, giving us the object of our verb: someone cóndidit hóminem, built a man, created a man. Now we just need a subject for the verb!

Deus únicus. And here is our subject: deus, meaning god (compare the English word deity), and the adjective únicus lets us know that is the one and only god, Deus únicus, the unique god.

unum. The line has one last word: unum is the masculine accusative form of unus, meaning one (compare the English word unity). The adjective goes with hóminem, creating a phrase: hóminem unum, one man. Notice how the object noun phrase hóminem unum wraps elegantly around the subject noun phrase, Deus únicus, heightening the contrast between the singularity of God, Deus únicus, with Adam - who was alone, unus, at the moment of his creation... but not for long.

So, we have the first line in which God, the one and only, Deus únicus, created one man on the earth, cóndidit in terris hóminem unum. Now let's see what the second line brings.

Factus homo. Here we have the word homo again, this time in the nominative case - so man will be the subject of the verb this time. The word factus is from the verb facere, meaning to make, to do; it is the participle form meaning made, done (compare the English word fact). So, after man was made, factus, he in turn did something - we need to read on to find out what the newly made man did!

multos. This is from the Latin adjective multus, meaning much or many. The form is masculine plural, and it is in the accusative case - so we have two clues about the object of our verb (it will be plural, and it will be masculine), but we need to read on to find out more.

fecit. Here is our verb; like factus, this is also a form of the verb facere - this time in the past tense: made. So, homo multos fecit, man made many somethings; we need to read on to find out just what it is that man made many of.

in orbe. Here we have the preposition in again, this time with the noun orbis, meaning circle, orb, orbit. As mentioned above, orbis terrarum, the circle of the lands, was a standard way in Latin to refer to the world, to the earth as a whole. So, man made many somethings in the world, factus homo multos fecit in orbe ... but we still need the last word of the poem to complete the sentence, giving us the object of the verb.

deos. Here is the word deus again, this time in the accusative plural form, agreeing with multos: multos deos, many gods. Note how the object noun phrase, multos deos, wraps elegantly around the verb phrase, fecit in orbe: man made many gods in the world.

So, while the first line featured God as the actor, the second line shows us the act of man, who is paradoxically both created, factus, and also a creator: factus homo fecit ... and what he made was a plenitude of gods in the world: multos in orbe deos.

Now you can put it all together:

Plus, you can see what you think of this English verse rendering by Thomas Harvey; I think he did a pretty good job, given how hard it is for English to keep up with intricacies of Latin word order.  As an English poet, Harvey uses rhyme, while Owen is using the classical Latin elegiac meter.

Only one God, one man did make on Earth:
One man, once made to many Gods gave Birth.

For more of Owen's poems in Latin, you can visit the Owen stream in my Latin distichs blog. Here is the blog post for this specific poem. As I add new English essays, you will be able to find those in the English stream at the blog. The next poem is one of the distichs of Cato: Senex et Iuvenis. 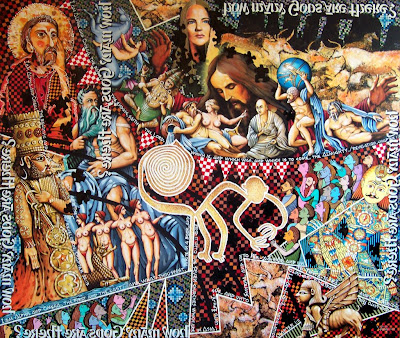