This is my nineteenth "Latin without Latin" essay. For background and a link to other essays, see this page: About the English Essays. This particular poem is from a collection of distichs by Georg Fabricius, Poetae Singulis Distichis Descripti, published in 1546. As the title reveals, the book contains distichs which describe various poets, but there are also distichs on other topics, too, such as the Muses, the Sibyls, and the Virtues. This particular distich is from the series describing the four cardinal virtues: Iustítia (Justice), Fortitúdo (Bravery), Temperántia (Moderation), and Prudéntia (Prudence; see previous essay). The virtue we will meet in this poem is Iustítia:

(For those of you interested in Latin meter, note that the meter here requires for unicuique to be five syllables: unicuïque.)

Let's see how the poem works:

Iustítia obsérvo. Here we have Iustítia in the nominative case together with a form of the verb observare, meaning to observe, to heed. The form is first-person singular, so Justice herself is speaking to us! Iustítia obsérvo - I, Justice, observe… but what does Justice observe? We need to keep reading to find the object for our verb.

leges. This is from the Latin word lex, meaning law (compare the English word legal). The form is accusative plural, giving us the object we were waiting for: Iustítia obsérvo leges - I, Justice, observe the laws.

opto. This is another first-person verb form, opto, I want (compare the English words opt, option). So, I, Justice, want nothing more, nihil ámplius opto … than what? We need to keep reading to find out.

quam decet. The Latin word quam means than and the word decet means what is suitable, fitting, right (compare the English word decent). So, I, Justice, want nothing more, nihil ámplius opto, than what is right, quam decet.

So, Justice has told us two things about herself so far: Iustítia obsérvo leges - I, Justice, observe the laws, and nihil ámplius opto quam decet, I want nothing more than what is right. Now let's see what else Justice wants to say about herself:

adtríbuens. This is from the Latin word adtribuere, to assign, appoint, attribute. It is a present active participle, singular and feminine in form, agreeing with Justice: I, Justice, am attributing, attribuens… but what is she attributing and to whom? We need an accusative object and a dative complement to complete the phrase.

suum. This is the Latin reflexive possessive, meaning his or her or their own. It is in the accusative case, giving us our object: Justice is attributing "to each his own," adtríbuens unícuique suum, giving each and every person just what they deserve. (You might hear an echo here of a famous Latin saying: cuique suum, "to each his own.")

So, let's review the whole poem: first of all, I, Justice, Iustítia, heed the laws, obsérvo leges; secondly, I want, opto, nothing than what is right, nihil ámplius quam decet, as I apportion to each and every person, adtríbuens unícuique, exactly what is theirs: suum.

Georg Fabricius is not a famous Renaissance poet, but I think this little poem of his is well worth remembering - and not just because I consider cuique suum to be something like a personal motto! I hope you enjoyed it and as I add new English essays, you will be able to find those in the English stream at the blog. The next essay is about the legendary Phoenix. 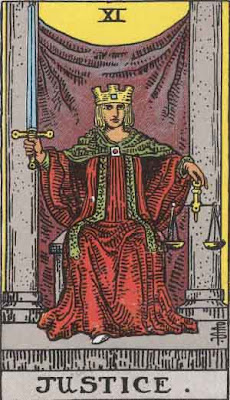 Email ThisBlogThis!Share to TwitterShare to FacebookShare to Pinterest
Labels: English, Fabricius, GPlusNo, Illustrated, Latin Without Latin
Newer Post Older Post Home
Welcome to the companion website for my latest book, Brevissima: 1001 Tiny Latin Poems. I hope you will enjoy browsing the site! Here is an INDEX PAGE with links to all 1001 poems. You can get a printed copy of the book from Lulu.com and/or you can download a complete PDF copy for free here. I'm also keeping an errata list here; if you notice anything I should add to the list, let me know.