This is my sixteenth "Latin without Latin" essay. For background and a link to other essays, see this page: About the English Essays. One of my favorite styles of Latin poetry is the rhyming poetry that was popular with medieval authors (rhyme was not favored by the classical Latin poets). You can find a large collection of rhymed Latin verse, monostichs and distichs, in Julius Wegeler's Philosophia Patrum. The distich I have chosen for today is #1153 in Wegeler's collection. It is a welcome poem in defense of women, given the steady stream of misogynistic poetry in both the classical and medieval traditions!

Let's see how it fits together:

Rústicus est. The Latin adjective rústicus means rustic, in the sense of a country bumpkin, someone who lives in the countryside as opposed to the city. The verb est lets us know that our subject is third-person singular: rústicus est, he is a country bumpkin.

vere. This is from the Latin adjective, verus, meaning true (compare the English words veridical and verisimilitude). This is the adverial form: truly, really. So, rústicus est vere, he REALLY is a country bumpkin. But who exactly? We need to keep on reading.

dicens. This is from the Latin verb dicere, to speak or to say (compare the English words dictation or diction). It is the present participle form, masculine singular, so it means saying or someone who is saying, someone who speaks.

mala. This is form the Latin adjective malus, meaning bad or evil (compare the English words malevolent or malice). Given that we would like an object for our verbal participle dicens, this is surely the neuter plural accusative form, giving us our object: dicens mala, someone who says bad things, someone who speaks badly.

de mulíere. Now we get a prepositional phrase: the preposition de means about or concerning, and the noun mulier means woman (mulíere is the ablative form required by the preposition). So the fellow who speaks badly about a woman (or women in general), dicens mala de mulíere, must be some kind of country bumpkin, rústicus est vere - even if he might happen to live in a city.

So that gives us our first line: Rústicus est vere, dicens mala de mulíere. Now let's see what the second line adds to the story:

nam. This Latin word is used to introduce a reason or explanation for something; you can translate it with the English word for or because. So, the second line is going to provide an explanation of the first line, telling us just why it is a foolish thing to speaking badly about women.

scimus. This is from the Latin verb scire, meaning to know (compare the English word science). It is the first-person plural form: scimus, we know.

vere. This is the word truly that we saw in the first line. Note that in this line, as also in the first line, it provides the line-internal rhyme which is a hallmark of medieval Latin poetry: vere - muliere.

sumus. This is from the Latin verb esse, meaning to be (compare the English word essential), in the first-person plural form again: we are. So, we know for sure, scimus vere, that we are - sumus - something… but what? We need to read on.

omnes. This is from the Latin adjective omnis, meaning all or every (compare the English words omnipresent or omnipotent). It is a plural form, modifying the subject of the verb: sumus omnes, we ALL are… something. We're still waiting on the predicate phrase.

de mulíere. In this prepositional phrase at the end of the second line of the poem, we get the punchline: in the first line, de mulíere meant about a woman or about women in general, while this time it means something different: from a woman. The Latin preposition de has both meanings: of - from. So, we all come from a woman, sumus omnes de mulíere, which is to say: we have a woman as our mother!

So here is the whole poem again with the same words at the end of each line meaning something quite different:

For more of these medieval rhyming poems in Latin, you can visit the rhyming stream in my Latin distichs blog, and here is a link to the blog post for this specific poem. For those who are interested in meter, note that while the hexameter form here is otherwise correct, the poet assumes a long e under stress in muliēre. As the quantitative system of Latin broke down and ultimately disappeared, you can see all kinds of oddities in the verse forms, especially as the poets did not have handy dictionaries with long marks in which they could look things up!

As I add new English essays, you will be able to find those in the English stream at the blog. The next essay offers advice for the rich man: O Dives, Dives! 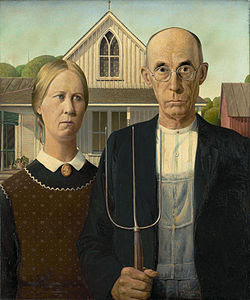