This is my twenty-seventh "Latin without Latin" essay. For background and a link to other essays, see this page: About the English Essays. It's been a while since I have done a distich by the Roman poet Martial and, given that his distichs are surely the most famous distichs in the classical tradition, I decided to choose one of his poems for today. It's on the theme of "the rich get richer" (or, "we are the 99%"). Here is the poem:

Semper. This is the Latin word for always (as you can see in the motto of the Marines, Semper Fi, which is short for Semper Fidelis, Always Faithful).

pauper. This Latin adjective means poor, impoverished. It is in the nominative form, so we now have some information about the subject of the verb.

eris. This is from the Latin verb esse, meaning to be; it is the future tense, second-person singular: eris, you will be. That gives us a complete statement: semper pauper eris, you will always be poor.

Aemiliáne. This is from the proper name Aemiliánus, and the form is vocative, which means Martial is addressing Aemilianus in the poem: O Aemilianus!

So, in the first line Martial is addressing someone directly, person to person. In the second line, he makes a broader statement that applies to the world in general:

dantur. This is from the Latin verb dare, meaning to give (compare the English word data). The form is present passive, are given, and third-person plural: things are given. We will need to read on to find the subject of the verb.

opes. This is from the Latin noun ops, meaning power, might, help; in the plural, which is the form we have here, it means wealth. The form is nominative, giving us the subject of our verb: dantur opes, wealth is given… but to whom? We need to read on for a dative complement to complete the statement.

nullis. This is from the Latin adjective nullus, meaning not anything, not anybody. The form is dative plural: to no persons at all, not to anybody, which is just what we needed to go with our verb: dantur opes nullis, wealth is not given to anybody.

nunc. This Latin adverb means now, nowadays - dantur opes nullis nunc, wealth is not given to anybody nowadays. Note also the nice alliteration: nullis nunc… and you will see that the next word also begins with the same sound: nisi.

nisi divítibus. Here we have Latin nisi, which means unless, except (literally not-if) and a form of the adjective dives, which means rich, wealthy. The form is dative plural, parallel to the form nullis which we saw earlier: dantur opes nullis, wealth is not given to anybody nowadays, nisi divítibus, except to wealthy people, people who are rich.

So, that gives us the whole poem - a poem that is about Aemilianus and his lack of funds, but also about the rest of us who are not rich either (assuming that you, like me, belong to the 99%), since it is only the rich who get richer, both in Martial's day and in ours:

For more of Martial's poems in Latin, you can visit the Martial stream in my Latin distichs blog. Here is a link to the blog post for this specific poem. As I add new English essays, you will be able to find those in the English stream at the blog. The next essay is also about a rich man and a poor man: Croesus et Irus. 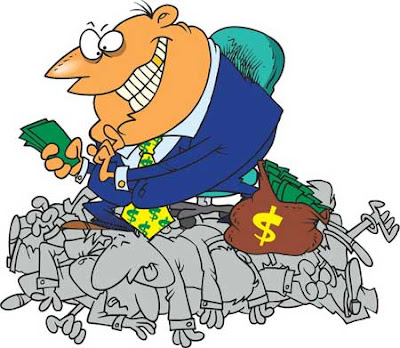 Email ThisBlogThis!Share to TwitterShare to FacebookShare to Pinterest
Labels: English, GPlusNo, Latin Without Latin
Newer Post Older Post Home
Welcome to the companion website for my latest book, Brevissima: 1001 Tiny Latin Poems. I hope you will enjoy browsing the site! Here is an INDEX PAGE with links to all 1001 poems. You can get a printed copy of the book from Lulu.com and/or you can download a complete PDF copy for free here. I'm also keeping an errata list here; if you notice anything I should add to the list, let me know.