This is my eighteenth "Latin without Latin" essay. For background and a link to other essays, see this page: About the English Essays. Today's poem is from a book published in 1624 by Jean Pignewart (Iohannes Pignevvart), a Cistercian monk and scholar. He attributes his collection of distich poetry to "Cato Bernardinus," invoking both the legendary "Cato" of Latin distich fame and also Saint Bernard of Clairveax who was famously associated with the Cistercian order. The subtitle of the book explains its contents as follows: quo sententiae valde morales, piae et sacrae, singulis distichis distinctae, continentur, the book contains thoughts that are deeply moral, pious and holy, separated into individual distich poems. There are many wonderful little poems in this book, but I don't really know anything about the author - so, if anyone has more information about Jean Pignewart, please let me know!

The poem I have chosen for this essay provides a miniature lesson in the so-called Cardinal Virtues, associating the lack of these virtues with famous Bible figures. In Latin, the four Cardinal Virtues, the Virtútes Cardináles, are Prudéntia (Foresight; see this earlier essay), Iustítia (Justice), Temperántia (Moderation) and Fortitúdo (Strength, Courage). Combine these with the Virtútes Theológicae , the three Theological Virtues - Fides (Faith), Spes (Hope) and Cáritas (Charity, Love) - and you get the seven virtues as expounded by Thomas Aquinas in his Summa Theologica. Most people know the phrase "faith, hope, and charity" - but the four cardinal virtues are not as famous, so this little poem can provide a way to remember them.

Virtútes Cardináles. This is from the Latin noun virtus, meaning virtue or excellence, and the adjective cardinális, which means crucial, essential. The form is plural: Virtútes Cardináles, the cardinal virtues. In Latin, the word cardo refers to a hinge or joint, the thing on which something turns. In the geography of the world, there were four "cardinal" directions (north, south, east, west), so in the moral geography of the world it makes sense that there would be four cardinal virtues on which moral behavior depends: Prudéntia, Iustítia, Temperántia, Fortitúdo.

Defuérunt. This is from the Latin verb deésse which means to lack, to be missing. The form defuérunt is past tense, plural, agreeing with our subject: Virtútes Cardináles Defuérunt, the cardinal virtues were lacking, were missing. The title thus gives us a clue as to how the poet will illustrate the virtues: he will not show us Bible characters who exemplified these virtues; instead, he is going to show us Bible characters who lacked these virtues.

Quáttuor. The last word of the title reminds us that there are indeed four, quáttuor, of these cardinal virtues (compare the English words quadrant, quatrain, etc.).

So, that gives us the title of the poem - Virtútes Cardináles Defuérunt Quáttuor, The Four Cardinal Virtues Were Lacking. Now let's turn to the poem and see just who in the Bible lacked these four virtues.

You can probably recognize some of the names here, all of which are in the dative case: Adam, Eva, Petrus (Peter), and Caïn (pronounced as two syllables: Ca-in; that's what the diaresis mark - ï - indicates). Let's see how these each of these four Bible characters, one by one, lacked a particular cardinal virtue:

Adae tempéries. Here we have the Biblical name Adam in the dative case, Adae, plus the noun tempéries, which is a synonym for temperántia. The poet faced a metrical challenge, since there is no way that the word temperántia can fit into the elegiac meter that he has chosen for the poem. Luckily, though, tempéries is able to fit the meter and convey the same idea as temperántia. Both tempéries and temperántia are verbal nouns related to the basic notion of tempus, time, apportioning things into their proper time or place. In other words, moderation. Of course, Adam famously lacked moderation when Eve offered him the apple!

So, that gives us the first line of the poem, Adam and Eve, with the verb défuit doing double duty for both halves of the line: Adae (défuit) tempéries, prudéntia défuit Evae. The second line will cover the two other virtues, Fortitúdo and Iustitia.

Firma Petro virtus. Just as the virtue temperántia did not fit the meter of the poem, the same is true of the virtue of fortitúdo, meaning strength or courage. There is just no way to include that word in an elegiac poem. So, the poet has come up with a synonymous phrase: firma virtus, the firm virtue, indicating the virtue of being steadfast, of standing firm. The phrase, firma virtus, wraps elegantly around the Bible character who lacked this virtue, défuit Petro. The reference is to Saint Peter, who denied Jesus three times before the cock crowed (you can find the story narrated in all four gospels: Matthew 26:69-75, Mark 14:66-72, Luke 22:54-62, John 18:15-27).

iustítia atque Caïn. The Latin word atque means and, with the specific sense of and also, and further, moreover, etc. It is used here to provide our final example of a Bible figure, Cain (pronounced Ca-in) who lacked, défuit, a virtue: iustítia, justice. It could be argued, in fact, that when Cain, son of Adam and Eve, murdered his brother Abel, it was the first act of injustice in the history of the world.

Unlike the other three names in the poem - Adam, Eva, and Petrus - the name Caïn does not have a special form to indicate the dative case. As often with Hebrew names, the word is "indeclinable" in Latin, which means the form of the noun does not change to indicate its grammatical role in the sentence. In context, however, with the dative forms Adae, Evae and Petro, we can confidently assume that Caïn is likewise in the dative case: there was lacking to Cain, défuit Caïn, the virtue of justice, iustítia.

So, that gives us our second line, which carries on with the verb, défuit, lacked, as implied from the first line: Firma Petro virtus (défuit), iustítia atque (défuit) Caïn.

Now put the lines back together again, and you have a negative reflection of the four cardinal virtues - Temperántia, Prudéntia, Fortitúdo and Iustítia - based on the four Bible characters who notoriously lacked these virtues:

Below you will find an illustration showing the four virtues personified as women (the noun virtus is feminine in gender, even if etymologically it is derived from the Latin word for man, vir - for the ancient Romans, virtus was a kind of manliness). Can you use the clues in the image to figure out which image represents which virtue?

Meanwhile, I hope you enjoyed this little poem by the "Bernardine Cato" a.k.a. "Cato Bernardinus," and as I add new English essays, you will be able to find those in the English stream at the Disticha Latina blog. The next essay is about one of these four cardinal virtues: Iustitia. 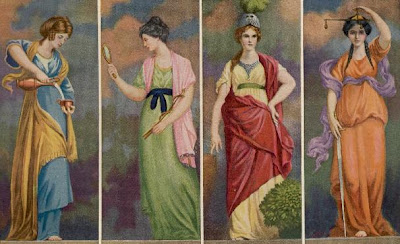 Email ThisBlogThis!Share to TwitterShare to FacebookShare to Pinterest
Labels: Cato Bernardinus, English, GPlusNo, Illustrated, Latin Without Latin
Newer Post Older Post Home
Welcome to the companion website for my latest book, Brevissima: 1001 Tiny Latin Poems. I hope you will enjoy browsing the site! Here is an INDEX PAGE with links to all 1001 poems. You can get a printed copy of the book from Lulu.com and/or you can download a complete PDF copy for free here. I'm also keeping an errata list here; if you notice anything I should add to the list, let me know.