This is my fifty-seventh "Latin without Latin" essay. For background and a link to other essays, see this page: About the English Essays. One of the things I like about the distich form is that it encourages poets to use paradoxes, taking advantage of the two-line format to introduce an element of paradoxical surprise. Sometimes the poets even include the word "paradox" in the title of the poem, as in this distich by John Owen, which has the following title: Paradóxon. Ad Amícam Abséntem.

Here is how the title works:

Paradóxon. This is a Greek word, meaning paradox (the -on is a noun ending in Greek, as likewise in the Greek word automaton which we use in English).

Ad Amícam. The preposition ad means to, and the word amícam is the accusative form of amíca, meaning girlfriend (compare the English work amicable). So, the poem is a paradox, paradóxon, which Owen is dedicating to his girlfriend, ad amícam.

Abséntem. This is from the Latin participle absens, meaning absent; the form agrees with amícam - so Owen is dedicating the poem to his absent girlfriend: ad amícam abséntem.

Here is the poem to that absent girlfriend:

And here is how it works:

Uror. This is from the Latin verb urere, meaning to burn (from the participle, ustus, we get the word combustion). The form is first-person singular, and it is passive: uror, I am burned, I am burning (i.e. intransitively, I am on fire).

amóre. This is from the Latin noun amor, meaning love (compare the English word amorous). The form is in the ablative case: amóre, by love, with love. That first the verb nicely: uror amóre, I am being burned by love, I am burning with love.

miser. This is the Latin adjective that means wretched, miserable. The form is masculine singular, agreeing with the subject of the verb: uror amóre miser, miserable, I am burning with love. In English, we're more likely to use an adverb instead of an adjective to express this idea: I am burning miserably with love.

tantóque. The -que is a particle at the end of the word which means and. The word tanto is from the adjective tantus, meaning so much, so great. It could be dative in case, or ablative; we will have to read on to find out which.

Quanto. This word is from the adjective quantus, meaning how much, how great. It is paired with tanto in a correlative expression: tanto-quanto, by so much as this much… The tanto-quanto construction is very simple in Latin as you can see, but it sure sounds awkward in English! We'll need to keep reading to see just what terms of the comparison are.

qui. Here we have a relative pronoun, qui, meaning who, which, that. It is in the nominative case, so it is the subject of the relative clause, and we need to find a masculine noun that is the reference for the pronoun.

me urit. Here we have the accusative form me of the first-person pronoun ego, meaning I, me. The word urit is the third-person singular form of the verb urere that we saw in the first line: urit, he/she/it burns. Put it all together and you have a relative clause: qui me urit, which (masculine thing) burns me.

ignis. This is the Latin noun that means fire (compare the English word ignite). The form is nominative, giving us the subject of the main clause - and since ignis is a masculine noun, it is also the reference for the pronoun qui: the fire, ignis, qui me urit, which burns me. Now we just need a verb for the main clause to put it all together!

abest. This is from the Latin verb abesse, to be away, to be absent (the word absens that we saw in the title is a participial form of this same verb). So, the farther away the fire is, quanto lóngius ignis abest, the more powerfully I burn, tanto poténtius uror.

So, unlike the usual sort of fire, the fire of love burns hotter at a distance: I am wretchedly on fire with love, says Owen, uror amóre miser, and the farther away the fire is, quanto lóngius ignis abest (which fire? the fire that burns me, ignis qui me urit), the more powerfully I burn, tanto poténtius uror. His absent girlfriend, amíca absens, is, of course, that far-away fire!

The laws of physics say the fire's heat is felt less at a distance, but the laws of love say just the opposite - hence the paradoxon, the paradox.

For more of Owen's poems in Latin, you can visit the Owen stream in my Latin distichs blog, and as I add new English essays, you will be able to find those in the English stream at the blog. 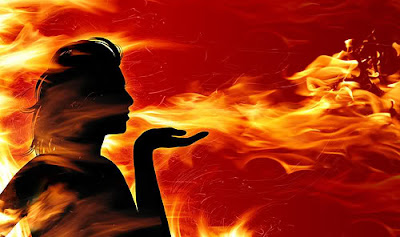 Email ThisBlogThis!Share to TwitterShare to FacebookShare to Pinterest
Labels: English, GPlusNo, Latin Without Latin, own
Newer Post Older Post Home
Welcome to the companion website for my latest book, Brevissima: 1001 Tiny Latin Poems. I hope you will enjoy browsing the site! Here is an INDEX PAGE with links to all 1001 poems. You can get a printed copy of the book from Lulu.com and/or you can download a complete PDF copy for free here. I'm also keeping an errata list here; if you notice anything I should add to the list, let me know.