This is my thirty-eighth "Latin without Latin" essay. For background and a link to other essays, see this page: About the English Essays. For today's distich about love, I've chosen one which is based on a famous line from the Ars Amatoria, The Art of Love, by the Roman poet Ovid (there's an English translation online by Tony Kline). The distich takes a line from that poem, and then follows it up with a new idea in the second line. So, the first line here is identical to what Ovid wrote, while the second line is original to our 17th-century Latin poet, Antoine Ferdinand Van Vlaenderen.

Iúpiter. This is the Latin name for the god Jupiter, the ruler of the gods of Mount Olympus (whom the Greeks called Zeus). The form is nominative, which means Jupiter will be the subject of the sentence.

periúria. This is from the Latin noun periúrium, meaning a false oath (compare the English word perjury). The form is accusative plural, so it provides us with the object of the verb.

ridet. This is from the Latin verb ridere, to laugh or scoff at (compare the English word ridiculous). So, we know how a complete statement with subject, object, and verb: Iúpiter periúria ridet, Jupiter laughs at false oaths.

amántum. This is from the Latin noun amans, meaning someone who loves, a lover (compare the English word amorous). The form is genitive plural: amántum, of the lovers. It is thus not false oaths in general, but the false oaths of lovers, periúria amántum (you know, the "I will love you forever," "I could never love anyone else," "I will always be faithful" type of oath…) that make Jupiter laugh.

So, that gives us the first line, which comes directly from Ovid's Ars Amatoria: Jupiter, from on high, Iúpiter ex alto, laughs at the false oaths sworn by lovers, periúria ridet amántum.

An quia. The word an in Latin is a particle that indicates we are dealing with a question, while the word quia means because: An quia, Could it be because…? Perhaps because…?

periúrus. This is a Latin adjective, meaning someone who makes false oaths, someone who commits perjury. The form is masculine singular, waiting for its noun.

Iúpiter ipse. Here we have Jupiter again, this time with the intensifying Latin ipse, meaning Jupiter himself, Iúpiter ipse.

fuit? This is from the Latin verb esse, meaning to be (compare the English word essential); fuit is the past-tense form: he was. This gives us the complete question: An quia, Perhaps because Jupiter himself, Iúpiter ipse, was someone who swore false oaths, periúrus fuit? (Note how nicely the predicate, periúrus…fuit, wraps around the subject, Iúpiter ipse).

Jupiter, of course, was notorious for his amorous activity, which included the seduction of many goddesses, nymphs, as well as mortal women (including married women too!) - love affairs in which he was willing to do, or say, anything to get what he wanted. For an overview, check out the Loves of Zeus page at Theoi.com. The inventory of Zeus' amatory exploits even carries on to a second page, and to a third page! So, our poet suggests, Jupiter, as an expert at the art of love himself, would no doubt be amused by the similar antics of mere mortal lovers. They might swear some false oaths, but Jupiter is the heavenly expert!

For an illustration, here is Jupiter engaged in one of his notorious affairs, when, disguised as a bull, he abducts the lovely Phoenician princess named Europa (painting by Jean Cousin below). You can find all the English essays in the English stream at the blog, and the next poem is again about Jupiter and his love life: Ob Amorem. 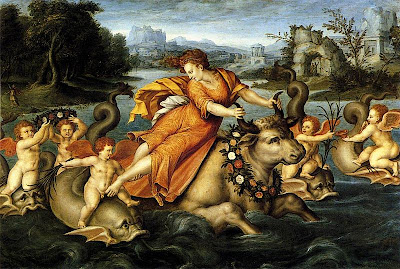 Email ThisBlogThis!Share to TwitterShare to FacebookShare to Pinterest
Labels: English, GPlusNo, Illustrated, Latin Without Latin, Vlaenderen
Newer Post Older Post Home
Welcome to the companion website for my latest book, Brevissima: 1001 Tiny Latin Poems. I hope you will enjoy browsing the site! Here is an INDEX PAGE with links to all 1001 poems. You can get a printed copy of the book from Lulu.com and/or you can download a complete PDF copy for free here. I'm also keeping an errata list here; if you notice anything I should add to the list, let me know.