This is my thirty-fifth "Latin without Latin" essay. For background and a link to other essays, see this page: About the English Essays. I thought this medieval distich from the Florilegium Gottingense (a 14th-century collection proverbs) would be a nice addition to this series of poems about love.

vinúmque. Here we have the Latin word for wine, vinum (as in the English word vintage). The little -que is a particle that gets stuck on the end of a word and, like et, it means and: vinumque = et vinum, and wine. So we have three nouns as the subject of the statement: nox et amor vinumque, night and love and wine.

nihil. This Latin word means nothing (compare the English words nihilism and annihilate). Since we already have the subjects for our verb, this is probably the object.

moderábile. This is from the Latin adjective moderabilis, meaning moderate. The form is neuter, agreeing with nihil, giving us a phrase: nihil moderábile, nothing moderate, nothing in moderation.

suadent. This is from the Latin verb suadére, to advise, urge (compare the English words suasion and persuade). It is third-person plural: suadent, they urge, which is what we want for our multiple subjects: nox et amor vinumque suadent, night and love and wine urge nothing in moderation, nihil moderábile.

Illa. This is from the Latin pronoun ille, meaning that one, he - and the form is feminine, illa, meaning he. Of the three nouns - nox, amor, vinum - only one is feminine in gender: nox. So, illa here refers to nox: she, the night - illa.

pudóre. This is from the Latin noun pudor meaning shame, modesty, sense of decency (compare the euphemistic use of the related Latin word, pudendum, in English). The form is ablative; we will need to wait for the verb to understand why the noun is in the ablative.

caret. This is from the Latin verb carere, meaning to lack, to be without (compare the English word caret, the punctuation mark that indicates where something is missing and needs to be inserted). The verb takes an ablative complement - to be lacking in something. So, that gives us a complete phrase: illa, she (the night), pudóre caret, is lacking in shame.

Liber amórque. Liber was the name for the Roman god of wine (read more about Liber at Wikipedia), and here the word Liber stands for vinum, the wine, completing our trio of subjects: illa (nox) along with Liber amórque, wine and love.

metu. This is from the Latin noun metus, meaning fear (compare the English word meticulous, which originally meant someone fearful and timid). The form is ablative, which lets us know that the verb carere, to lack, is implied here, even if it is not stated explicitly: Liber amórque (carent) metu, wine and love lack fear - just as nox pudore caret, night lacks shame.

So, put them all together and you have a dangerous combination: the emotions of pudor and metus, fear and shame, would normally exert some restraint on human behavior, but the night knows no shame, illa pudóre caret, while wine and love know no fear, Liber amórque metu carent, which is why the combination of the three, nox et amor vinúmque does not provoke anything in moderation, nihil moderábile suadent:

The high heels in the image below don't exactly fit with the medieval provenance of the poem, but I thought it was a good illustration! :-)

For more poems from this medieval collection, you can visit the Florilegium Gottingense stream in my Latin distichs blog. Meanwhile, as I add new English essays, you will be able to find those in the English stream at the blog. The next poem is also about love and wine: Dulcius Nil Puto. 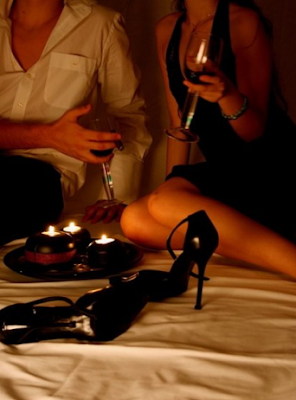