This is my thirty-second "Latin without Latin" essay. For background and a link to other essays, see this page: About the English Essays. I thought I would follow up yesterday's emblem about lion-taming with a different lion emblem, one that shows Cupid, the god of love, taming a lion. The emblem is from Daniël Heinsius' Emblemata amatoria (1607/8) which you can see online at the Emblem Project Utrecht. 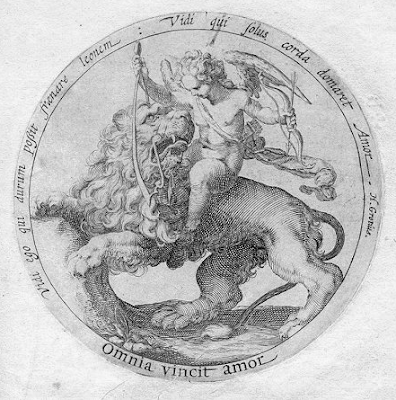 The title explains how it is possible for Cupid to overcome the lion: Ómnia Vincit Amor. (This is a famous Latin saying in its own right; you can read more about that at Wikipedia.)

Ómnia. This is from the Latin adjective omnis, meaning each, every, all. It is the neuter plural form: ómnia, everything. It could be either the subject or the object of the verb; we will have to read on to find out which it is.

Vincit. This is from the Latin verb vincere, meaning to defeat, conquer (compare the English word invincible, something that cannot be conquered). The form is third-person singular: vincit, so we know that omnia (which plural) cannot be the subject; it must be the object. So, something (we don't know what yet) conquers all things, omnia vincit.

Amor. This is the Latin noun for love (compare the English word amorous), giving us the subject of the verb: Ómnia Vincit Amor, Love Conquers All Things.

So, that gives us the title - now we can read the poem:

Here is how the poem is put together:

Vidi. This is from the Latin verb videre, meaning to see (compare the modern English word video). The form is first-person singular, past tense: vidi, I saw. (Yes, as in the famous words of Julius Caesar: Veni, Vidi, Vici - I Came, I Saw, I Conquered).

ego. This is the first-person singular pronoun in Latin: I. The verb vidi already tells us who the subject is, so the pronoun is used here for emphasis: vidi ego, I (!) saw.

qui. This is the Latin relative pronoun, meaning who, which, that. In the nominative form here,  it will be the subject of the relative clause: vidi ego, I saw someone, qui, who...

durum. This is from the Latin adjective durus, meaning hard, harsh, cruel (compare the English word durable). It is in the accusative case, giving us the object of the verb - we will need to read on to find out more.

possit. This is from the Latin verb posse, meaning can, be able (compare the English word possible). The form is subjunctive, meaning it conveys the idea of having the potential to do something, being able to do something in general. The verb needs an infinitive complement: vidi ego qui possit, I saw someone who was able to … do what?

frenáre. Here is our infinitive: frenáre, to hold back, bridle, curb (compare the English word refrain). So, we have a complete verbal phrase, possit frenáre, able to hold back, able to manage… but we still need a noun that can be the object of the verb.

leónem. This is from the Latin word leo, meaning lion (compare the English word leonine). The word is in the accusative case, giving us our object, and it agrees with the adjective we saw earlier: durum leónem, the harsh lion. Put it all together: Vidi ego, I have seen someone, qui possit frenáre, who was able to bridle the harsh lion, durum leónem. As often, the noun phrase, durum … leónem, wraps around the verb phrase, possit frenáre, in an elegant style of word order that is impossible to imitate in English.

That gives us the first line, stating that there is someone who is able to restrain a lion, Vidi ego qui durum possit frenáre leónem; the next line will tell us more about this person's exploits and reveal his identity.

Vidi qui. The second line starts out much like the first: I have seen (someone) one...

solus. This is the Latin adjective meaning alone, sole, only. Here it modifies the pronoun qui: someone who, all on his own, qui solus… (we are still waiting on the verb).

corda. This is from the Latin word cor, meaning heart (compare the English word cordial, meaning heartfelt, warm-hearted). The form is plural, so now we have the object of our verb - we just need the verb itself.

domáret. This is from the Latin verb domare, meaning to tame, subdue (compare the English word domestic). So, that gives us our complete relative clause: I have seen someone who, all on his own, qui solus corda domáret, is able to tame people's hearts - even if those hearts are as hard as a lion is harsh.

Amor. The final word of the poem reveals just who that someone, qui, happens to be: Amor, Love.

So, you are ready to read through the poem again, looking at the dramatic image above which illustrates the poem, and note how the words of the poem and its title are neatly inscribed in a ring around the image.

I really like the way Cupid is using his bow as an actual bridle! It would be difficult to show Cupid taming human heats, but his depiction of Cupid as a lion-tamer is very dramatic indeed! For more emblematic poetry in Latin, you can visit the emblem stream in my Latin distichs blog. As I add new English essays, you will be able to find those in the English stream at the blog. The next poem is also about love: Amator.
Posted by Laura Gibbs at 3:51 PM

Email ThisBlogThis!Share to TwitterShare to FacebookShare to Pinterest
Labels: English, GPlusNo, Heinsius, Illustrated: Emblems, Latin Without Latin
Newer Post Older Post Home
Welcome to the companion website for my latest book, Brevissima: 1001 Tiny Latin Poems. I hope you will enjoy browsing the site! Here is an INDEX PAGE with links to all 1001 poems. You can get a printed copy of the book from Lulu.com and/or you can download a complete PDF copy for free here. I'm also keeping an errata list here; if you notice anything I should add to the list, let me know.