These poems come from the epigrams of John Owen, a remarkable figure of the Latin poetry Renaissance, who was known under various Latin names: Joannes Owenus, Joannes Ovenus and Joannes Audoenus, etc.. He was born in 1564 (?), and published his epigrams in the years 1606-1613; he died in 1622 (?). You can read more about Owen's life and career in Dana Sutton's Introduction to the Epigrammata.

There is a lovely edition of the epigrams, in both Latin and in the English translation by Thomas Harvey (1677), which Dana Sutton has put online: The Epigrammata of John Owen.

There are numerous editions at GoogleBooks, along with a Latin-French edition and a Latin-Spanish edition. 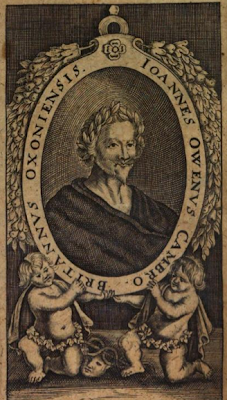 Here is the Owen epigram of the day. Click here to see illustrations and notes to the epigrams by Owen published in this blog. For more about using this widget in your own blog or website, see the Owen Epigram Widget page.
Posted by Laura Gibbs at 2:31 PM

Email ThisBlogThis!Share to TwitterShare to FacebookShare to Pinterest
Labels: About the Authors