Here is today's distich by John Owen, with an English translation by Thomas Harvey, 3.208. The paradox expressed by this distich is really delightful: Owen opens with the phrase viva vox of speaking as opposed to the vox mortua of writing, he then notes that it is those dead voices of the written word which live on, while spoken words do not.

OF SPEAKING AND WRITING
Though words be living voices, writings dead,
Yet these survive, when those are vanished.
The vocabulary is keyed to the DCC Latin Vocabulary list. There are only two words in this poem that are not on the DCC list:

Here is a cuneiform inscription from the 26th century B.C.E. - written in stone, and still speaking to us, over 4000 years later. 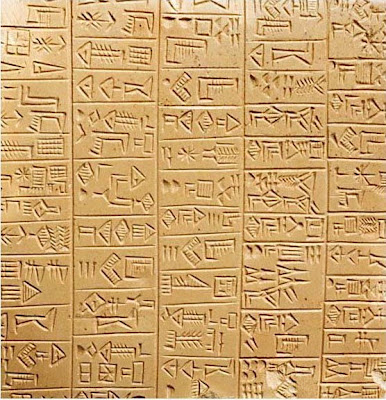