This is my twelfth "Latin without Latin" essay. For background and a link to other essays, see this page: About the English Essays. This little poem comes from the distichs of Publius Faustus Andrelinus (c. 1460-1518). He was born in Forli in northern Italy and later moved to France, where he taught at the University of Paris. He wrote many types of Latin poetry, including distichs! You can find his hecatodistichon, his "hundred distichs," at Google Books. Andrelinus assigns titles to his poems, and the title of this poem is: Advérsis Succúmbens. So, let's start with the title!

Advérsis. This is from the Latin adjective, advérsus, meaning opposed, hostile. (Compare the English words adverse and adversity.) The form here could be dative plural or ablative plural; we will have to wait and see which it is.

So the poem is going to be about someone who gives in when the going gets tough. Let's read the poem to find out more:

Let's see what it says!

Cásibus. This is from the Latin masculine noun, casus, which is a verbal noun from the verb cadere, to fall. So a casus is a falling, a downfall, an overthrow - but it also means chance or accident. You can see the Latin root in the English word accident, and it's lurking there in the word chance, too: English chance comes from Old French cheance, from Latin cadentia. So this poem has something to do with chance circumstances, in either the dative or ablative case. We'll have to keep reading to find out just how the word is being used.

advérsis. This is the word we saw in the title; here it matches the word cásibus, giving us the noun phrase: cásibus advérsis, adverse accidents or, more simply, what we would call bad luck.

fracta. This is from the Latin adjective fractus, broken (compare the English words fracture and fraction). The ending is either feminine or neuter, but we can't be sure which until we read on.

qui. This is the Latin relative pronoun, who. It is masculine singular here, and it's nominative, so we have the subject of our relative clause! That means we've got three noun phrases in play so far (cásibus advérsis, fracta, and qui), but nothing to tie them together yet.

mente. This is from the Latin feminine noun, mens, meaning mind (compare the English word mental). It is in the ablative case and goes with fracta, giving us fracta mente, a broken mind. Broken by what? Broken by bad luck, cásibus advérsis (we can safely identify that phrase now as ablative plural). This entire phrase is what is called an ablative absolute in Latin, a noun phrase that can stand on its own in the sentence: his mind being broken by bad luck, cásibus advérsis fracta mente. Now we just need a verb to go with our relative pronoun, qui.

recúmbit. This is the verb we were looking for! It is from recumbere, to sink down, lie down, collapse (compare the English recumbent, as in a recumbent bicycle). The form is third-person singular, which is what we wanted: qui recúmbit, (he) who collapses when his mind is broken by bad luck, cásibus advérsis fracta mente. Note that this verb, recúmbit, echoes the participle in the title: Advérsis Succúmbens, Surrendering to Adversity.

This first line is not a complete statement, but is instead a relative clause, describing a certain type of person. We will need to read the second line to find out more about that person:

dexterióre. This is from the Latin adjective dexter, which means right (i.e. not left), but also favorable, propitious, positive (compare the English word dexterity).. More specifically, it is from the comparative, dextérior, meaning more favorable, more positive. The form dexterióre is ablative singular, so that identifies Fortúna as ablative: Fortúnā dexterióre, more favorable fortune, better luck. As a result, we've now got an ablative phrase, Fortúna dexterióre, and a verb, ignórat, but we need an infinitive to tie it all together.

frui. Here is our infinitive! The verb frui means to use, to enjoy, to delight in. Even better: the verb frui takes an ablative complement. So now we have a complete statement: ignórat frui, he doesn't know how enjoy fortúna dexterióre, his better luck. In other words, when his luck does take a turn for the better, he doesn't know how to take advantage of it!

Note how the words of this line are elegantly interwoven, with the noun phrase Fortúna dexterióre woven into the verb phrase ignórat frui, something that is just impossible in English but very natural and elegant in Latin: Fortúna ignórat dexterióre frui.

So, now we can put it all together. As often, the two-line poem is based on a contrast between the topic of the first line - cásibus advérsis, bad luck - and the topic of the second line - Fortúna dexterióre, more favorable luck. More specifically, the poem tells us that the person who collapses, qui recúmbit when his mind is broken by bad luck, cásibus advérsis fracta mente, is not able to take advantage of better circumstances when his luck changes, Fortúna ignórat dexterióre frui.

The message, then, is don't give up when things look bad - if you give in to bad luck, you won't be able to enjoy your good luck when the time finally does come! After all, the famous Wheel of Fortune does turn around and around - if you're down, don't worry: the wheel will turn you upright again.

Andrelinus was quite famous in his day, but is now forgotten; by reviving some of his poems here, I hope to bring him back a little bit of the fame he once enjoyed - a bit of Fortúna dextérior as it were. Meanwhile, As I add new English essays, you will be able to find those in the English stream at the blog. The next essay is a poem about the summer solstice: Beatus. 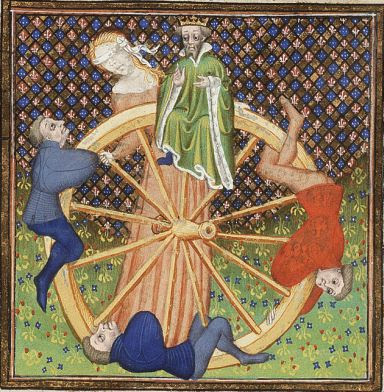 Email ThisBlogThis!Share to TwitterShare to FacebookShare to Pinterest
Labels: Andrelinus, English, GPlusNo, Illustrated, Latin Without Latin, noDCC
Newer Post Older Post Home
Welcome to the companion website for my latest book, Brevissima: 1001 Tiny Latin Poems. I hope you will enjoy browsing the site! Here is an INDEX PAGE with links to all 1001 poems. You can get a printed copy of the book from Lulu.com and/or you can download a complete PDF copy for free here. I'm also keeping an errata list here; if you notice anything I should add to the list, let me know.