This is my thirteenth "Latin without Latin" essay. For background and a link to other essays, see this page: About the English Essays. This little poem comes from the distichs of John Owen, a Renaissance Latin poet who was born in Wales around 1564. The poem uses the metaphor of the summer solstice (the shortest night of the year, and the longest day) as a metaphor for human life. Before the "Old Style" calendar was reformed in 1752, the summer solstice fell on June 11, as you can see here in Owen's little poem.

Owen almost always gives his poems titles, and the title of this poem is BEÁTUS, which means "The Blessed Man" or "The Happy Man" (compare the English words beatific or the English name Beatrice).

Now let's see what the poem itself says!

Undécimo. This is from the Latin adjective undécimus, meaning eleventh. It is a compound: un- (one) plus décimus (tenth), hence the result: eleventh (compare the English words unity and decimal). It is in the ablative or dative form; we will have to wait and find out what form this is and also what noun the adjective modifies.

Iuni. This is from the Latin word Iunius, meaning Iunius mensis, the month of June. The month is named in honor of the goddess Juno. So now we know what noun the adjective undécimo refers to: undécimo (die), the eleventh day of June. We still don't yet know if it is in the ablative or dative case.

tua. This is from the Latin word tuus, meaning yours (the Latin word tu means you). It is either feminine singular or neuter plural in form; we will have to wait to find out which. Remember the title of the poem: beátus, the blessed or fortunate man. So, he is probably the "you" who is being addressed here.

par. This is a Latin adjective meaning equal or equal to (this is the origin of the English word pair). It takes a dative complement: so something of yours (we don't know yet what), tua, is equal to the eleventh of June, undécimo Iuni par, the old date of the summer solstice.

sors. This Latin word means lot or allotment, and it can have the sense of a supernatural allotment, a fate or destiny. (So the everyday English word sort comes from this Latin word, as does the supernatural word sorcery.) This gives us the feminine noun we were looking for: tua sors, your fate, is like the eleventh of June, undécimo Iuni par. The noun is in the nominative case, so we know it has to be the subject of the verb - and, as often in Latin, we are still waiting for the verb.

laeta. This is from the adjective laetus, meaning happy, joyful, glad (compare the English name Letitia, which is from the Latin noun laetitia, joyfulness). It is in the feminine singular form, so it tells us more about your fate - not just any fate, but a happy fate: tua sors laeta.

vidétur. As often, the Latin verb comes at the very end. This is from the verb videre, meaning to see (compare the English word video). The form vidétur is a passive form, meaning it is seen to be or, more simply, it seems. It is third person singular, which is what we want for our subject, sors, fate.

So that gives us the first line, and it's something like a riddle: somehow, you lucky person (beátus), your happy fate, tua sors laeta, seems equal, par vidétur, to the 11th of June: undécimo Iuni. As often in a distich poem, the structure is like a riddle. The first line leaves us asking: what does a happy life have in common with the summer solstice? The second line of the poem will answer that question for us.

Post. This is the Latin preposition meaning after (compare the Latin phrase post meridiem, after noon). The preposition takes an accusative complement.

noctem. This is from the Latin word nox, meaning night (compare the English word nocturnal). It is in the accusative case, which is just what we want: post noctem, after a night.

fulsit. This is from the Latin verb fulgere, meaning to shine (compare the English words fulgent, effulgent, refulgent). It is a perfect tense verb form, third person singular: after a night, post noctem, something (we don't know what yet) has begun to shine, fulsit.

lux. This is the Latin verb that means light, daylight (as in the famous Latin phrase, fiat lux, let there be light). The noun is in the nominative case, which gives us the subject of our verb: after a night, post noctem, the day has begun to shine, fulsit lux.

tibi. This is from the Latin pronoun tu, meaning you. It is in the dative form, meaning for you. So the day has dawned for you, fulsit lux tibi.

longa. This is from the Latin adjective longus, meaning long. As often in Latin poetry, the poet elegantly surprises us with some additional adjectives after the main statement. This adjective has to go with the word lux, light, so now we know what kind of light has dawned - it is a long daylight, lux longa, that has begun to shine for you, fulsit tibi.

brevem. This is from the Latin adjective brevis, meaning short or brief (compare the English word brevity). This is another surprise adjective at the end of the line. As it is in the accusative case, it goes with noctem, which is also in the accusative case: post noctem brevem, after a short night. Notice how the phrase post noctem ... brevem wraps around the entire line, a kind of elegant word order that is just not possible in English.

So, we now have our answer: a happy life is like the summer solstice because after just a short night (only a little darkness, just a brief period of despair), post nocetem brevem, a long daylight, lux longa, has shone upon you: fulsit tibi! The blessed life has the shortest night and the longest day, metaphorically speaking.

Now you can put both lines together:

For an English verse translation, here is one by Thomas Harvey:

Although English cannot manage the same elegant word order as the Latin, I do like Harvey's use of long-long day and short-short night!

For more of Owen's poems in Latin, you can visit the Owen stream in my Latin distichs blog. Here is a link to the blog post for this specific poem. As I add new English essays, you will be able to find those in the English stream at the blog. The next essay is about a life of hope and work: In Spe et Labore.

Meanwhile, for an image, here is the dawn of the summer solstice at Stonehenge: 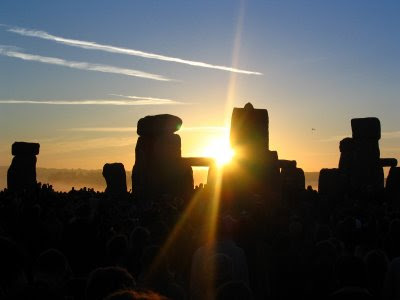 Email ThisBlogThis!Share to TwitterShare to FacebookShare to Pinterest
Labels: English, GPlusNo, Illustrated, Latin Without Latin, noDCC, Owen
Newer Post Older Post Home
Welcome to the companion website for my latest book, Brevissima: 1001 Tiny Latin Poems. I hope you will enjoy browsing the site! Here is an INDEX PAGE with links to all 1001 poems. You can get a printed copy of the book from Lulu.com and/or you can download a complete PDF copy for free here. I'm also keeping an errata list here; if you notice anything I should add to the list, let me know.