This is my fifth "Latin without Latin" essay. For background and a link to other essays, see this page: About the English Essays. This poem comes from a delightful book that I discovered while researching Latin distichs: Antoine Ferdinand Van Vlaenderen's Epigrammata Miscellanea, published in 1666. It opens with the famous Latin saying, Omnia vincit amor, "Love conquers all."

Ómnia. This is the Latin word for everything, literally all things, plural. It comes from the adjective omnis, meaning each, every, all (compare the English words omnivore, omniscient, etc.). This is a neuter noun, which means the nominative and accusative forms are identical (this is true for all neuter nouns in Indo-European languages, not just Latin). So, we cannot tell yet if this word gives us the subject of the verb (yet to come) or the verb's object.

vincit. This is from the verb vincere, to conquer (compare the English word invincible, for someone who cannot be conquered). The form is third-person singular, he/she/it conquers. So, that means ómnia cannot be the subject of the verb, since the verb is singular. So, it must be the object: something conquers all things. Now we just need a subject.

amor. Here is our subject: love! (Compare the English word amorous.) So, the poem begins with a famous Latin saying: Ómnia vincit amor, Love conquers all.

Now you are ready for the second half of the line:

sed. This Latin word means but. So, we are going to learn something that contradicts the idea that ómnia vincit amor.... but... what?

amórem. Aha, this is the word love again, but this time it is in the accusative case, the object of the verb this time, instead of the subject.

Cýnthia. You will recognize this as the name Cynthia. The letter y and the letter combination th lets us know that this was originally a Greek name. More precisely, the name Cynthia means someone (a feminine someone) from Mount Cynthus on the Greek island of Delos. So just who is this Cynthia, born on the island of Delos? That would be the goddess Artemis, known in Latin as Diana, the twin sister of the god Apollo. Cýnthia is our subject, and amórem is our object - now we just need a verb.

vicit. This is the past tense form of the verb we saw earlier, vincit. So we have a complete statement: amórem Cýnthia vicit - the goddess Cynthia conquered love.

The second half of the line thus takes the traditional Latin saying and trumps it with the goddess Artemis: Ómnia vincit amor, sed amórem Cýnthia vicit.

enim. This little word is really more like verbal punctuation in Latin; you can consider it the equivalent a colon but in the form of a word rather than a punctuation mark (remember Victor Borge's phonetic punctuation?). The word always goes in second position because it does not really convey meaning on its own; instead, after the first element of the sentence, this little word indicates that what is coming is something like an explanation or elaboration on the previous sentence. That's why it make sense to use a colon at the end of the first line when punctuating the written poem - the colon mark is the punctuation equivalent of the little enim in the second line:

nullum. This is from the Latin adjective, nullus, which means not any, none (compare the English verb nullify). It could be neuter, nothing, or masculine, no man. We will have to read on to find out which word we are dealing with here.

nosse. This a contraction of the verb novisse, which means to have known. It is in the infinitive form, which is just what we wanted to go with the verb fertur: someone (we don't know who yet) is reported to have known, fertur nosse, nothing or no one, nullum (we are still waiting on that also).

Diána. Here is our subject: Diana, the Roman name of the goddess Artemis, also known as Cynthia. Fertur enim nullum nosse Diána: Diana is reported to have known known no... (just one more word to complete the sentence!).

virum. This is from the Latin word vir, meaning man (compare the English word virile). The form is accusative, agreeing with the word nullum we saw earlier, nullum virum: not any man.

So now you have the second line: Fertur enim nullum nosse Diána virum, Diana is reported to have known no man.

I hope you enjoyed this little mythological poem, and as I add new English essays, you will be able to find those in the English stream at the Disticha Latina blog. I've added a new poem, this time by Thomas More: In Mortis Diem Omnibus Incertum. Meanwhile, here is a sculpture of Diana by Bernardino Cametti: 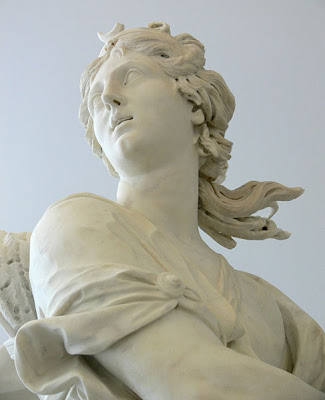 Email ThisBlogThis!Share to TwitterShare to FacebookShare to Pinterest
Labels: English, GPlusNo, Illustrated, Latin Without Latin, noDCC, Vlaenderen
Newer Post Older Post Home
Welcome to the companion website for my latest book, Brevissima: 1001 Tiny Latin Poems. I hope you will enjoy browsing the site! Here is an INDEX PAGE with links to all 1001 poems. You can get a printed copy of the book from Lulu.com and/or you can download a complete PDF copy for free here. I'm also keeping an errata list here; if you notice anything I should add to the list, let me know.