This is my tenth "Latin without Latin" essay. For background and a link to other essays, see this page: About the English Essays. One of my favorite styles of Latin poetry is the rhyming poetry that was popular with medieval authors (rhyme was not favored by the classical Latin poets). You can find a large collection of rhymed Latin verse, both monostichs and distichs, in Julius Wegeler's Philosophia Patrum. The distich I have chosen for today is #1014 in Wegeler's collection.

You can probably see already that there is some great word play going on in this poem. Now let's see what it means:

Víncere. This is the verb vincere, to conquer, defeat (so someone who is invincible is someone who cannot be conquered or defeated). It is the infinitive form, so we will have to wait and see how it fits into the rest of the line.

quaeris. This is from the Latin verb quaerere, to look for, seek, ask (compare the English words query and quest). It is in the second-person singular form, and it wants an infinitive, so this fits together nicely: víncere si quaeris, if you seek to conquer... what? We still need an object.

Pronunciation Note. Since this is a rhyming poem, I need to say something here about the pronunciation and spelling of the word quaeris. In classical Latin, it is spelled with "ae" and pronounced with a diphthong that sounds something like the "ai" in English "aisle." In medieval Latin, however, it was spelled "e" because the diphthong had collapsed into the simple vowel. So, to look this word up in a Latin dictionary, you need to spell it "quaeris," but in order to appreciate the rhyme of the poem, you need to say it "queris" instead.

And now, back to the poem:

Vénerem. This is from the Latin word Venus, which is the name of the goddess of love, whom the Greeks called Aphrodite (compare the English phrase venereal disease). The form is the accusative singular, which is just what we wanted, since that gives us the object of the verb: Víncere si quaeris Vénerem, if you want to conquer love... then what? We need to keep reading.

fúgiens. This is from the Latin verb fugere, meaning to run away, flee (compare the English word fugitive). The form is a present active participle: running away. We'll have to read on to see how it fits into the rest of the line.

superábis. This from the Latin verb superare, to overcome, defeat, conquer (compare the English word superior). The form is second-person singular, this time in the future tense: you will overcome. We can put that together with the participle: fúgiens superábis; running away, you will be victorious!

So that's our first line, and it expresses one complete, albeit paradoxical, thought: Víncere si quaeris Vénerem, if you seek to conquer love, fúgiens superábis, you will be victorious by running away. It's a wonderful little irony: normally the loser is the one who runs away - but not when it comes to love. If you want to survive your encounter with the love goddess, the best thing you can do is run away! That's the only way you can be sure to defeat her seductive intentions.

Instans. This is from the Latin verb instare, to stand in or near, be close, pursue; it's a compound of in-stare (compare the English words instant and also insistent). Like fúgiens, this is a present active participle - in fact, the two participles are opposites: fúgiens, running away versus instans, pursuing.

victus. This is also from the Latin verb vincere; it is the passive participle: conquered, defeated. It is in the nominative form, so it refers to the subject of the verb - but we are still waiting for our verb.

eris. This is from the Latin verb esse, to be; it is second-person singular, in the future tense: you will be. More specifically, victus eris: you will be conquered, you will be defeated. So, we have a statement here that complements the preceding statement: Instans victus eris, By pursuing Venus, you will be conquered (as opposed to the previous statement: by running away, you will conquer). Note the mid-line rhyme: quaeris-eris (using medieval pronounciation, these two words do rhyme: queris-eris). Now we are ready for the second half of the line.

Vénerem. We've seen this word before: it is the goddess Venus, in the accusative case, waiting to be the object of a verb.

fugiéndo. This is from fugere, the verb we saw earlier; this form is the verbal noun, fleeing, in the ablative case: fugiéndo, by fleeing, by running away ... Now we just need a main verb to put it all together.

fugábis. Here is our main verb, and it is a bit of a play on words: it is from the Latin verb fugáre, to put to flight, to chase away. So, Latin fúgere means to run away - but Latin fugáre means to make someone else run away! The form is second-person singular, future tense: you will put Venus to flight, Vénerem fugábis, you will make her run away. How? By running away from her, fugiéndo.

So the poem closes with a restatement of the paradoxical need to run away in order to achieve victory: Vénerem fugiéndo fugábis, by fleeing Venus, you will put her to flight. Note the line-end rhyme: superábis-fugábis.

Can you put it all together now? Keep an eye out for all the Latin rhyme and word play: Víncere si quaeris Vénerem, if you want to conquer Venus, fúgiens superábis, you will be able to defeat her by running away. On the other hand, instans victus eris, if you chase her, you will be defeated; Vénerem fugiéndo fugábis, while you will put Venus to flight simply by running away.

For an illustration, here is a lovely Greek vase painting of the goddess of love, accompanied by the winged Erotes, called Cupids in Latin. For more of these medieval rhyming poems in Latin, you can visit the rhyming stream in my Latin distichs blog, and here is a link to the blog post for this specific poem. As I add new English essays, you will be able to find those in the English stream at the blog. The next essay is about wisdom and foolishness: Sapientia et Stultitia. 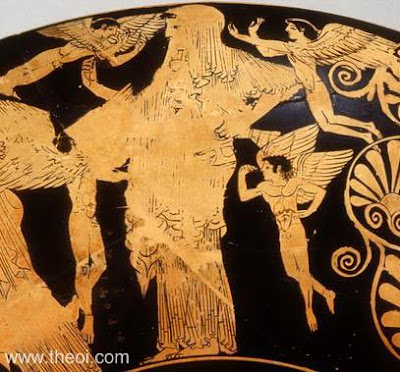 Email ThisBlogThis!Share to TwitterShare to FacebookShare to Pinterest
Labels: English, GPlusNo, Illustrated, Latin Without Latin, noDCC, Rhyme
Newer Post Older Post Home
Welcome to the companion website for my latest book, Brevissima: 1001 Tiny Latin Poems. I hope you will enjoy browsing the site! Here is an INDEX PAGE with links to all 1001 poems. You can get a printed copy of the book from Lulu.com and/or you can download a complete PDF copy for free here. I'm also keeping an errata list here; if you notice anything I should add to the list, let me know.