When great Attempts are undergone
Ioyne Strength and Wisedome, both in one.

Source: Gabriel Rollenhagen (1583-1619), Nucleus, 91, with an English rendering by George Wither. Meter: Elegiac. The most famously wise of the centaurs was Chiron, Achilles' own tutor.

Wisdom (sapientia) should be joined (est iungenda) with strength (viribus) in all ways (modis cunctis); he who does not know how (qui nescit) to use his strength (uti robore) often falls (saepe cadit).

Here are the lines of the first stanza of Wither's poem inspired by this emblem:


If (Reader) thou desirous be to know
What by the Centaure, seemeth here intended;
What, also, by the Snake, and, by the Bowe,
Which in his hand, he beareth alway bended:
Learne, that this halfe-a man, and halfe-a horse,
Is ancient Hieroglyphicke, teaching thee,
That, Wisedome should be joyn'd with outward force,
If prosperous, we desire our workes to be.
His Vpper-part, the shape of Man, doth beare,
To teach, that, Reason must become our guide.
The hinder-parts, a Horses Members are;
To shew, that we must, also, strength provide:
The Serpent, and the Bowe, doth signifie
The same (or matter to the same effect)
And, by two Types, one Morall to implie,
Is doubled a fore-warning of neglect.
When Knowledge wanteth Power, despis'd we grow,
And, know but how to aggravate our paine:
Great strength, will worke it owne sad overthrow,
Vnlesse, it guided be, with Wisedomes reine. 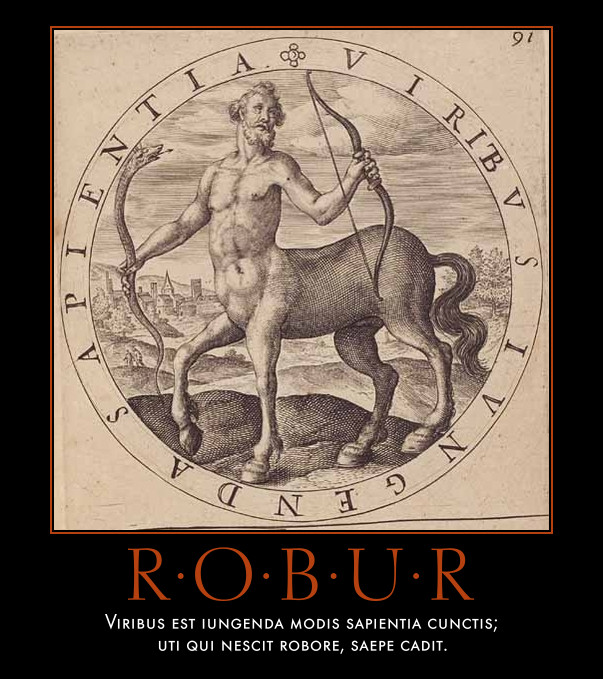 Email ThisBlogThis!Share to TwitterShare to FacebookShare to Pinterest
Labels: DCC1, Illustrated: Emblems, Rollenhagen
Newer Post Older Post Home
Welcome to the companion website for my latest book, Brevissima: 1001 Tiny Latin Poems. I hope you will enjoy browsing the site! Here is an INDEX PAGE with links to all 1001 poems. You can get a printed copy of the book from Lulu.com and/or you can download a complete PDF copy for free here. I'm also keeping an errata list here; if you notice anything I should add to the list, let me know.