This is my thirtieth "Latin without Latin" essay. For background and a link to other essays, see this page: About the English Essays. Today I wanted to include a poem that is connected to the "bestiary" tradition, a wide-ranging collection of animal legends that were famous through the ancient and medieval worlds, and which continued to be well known in the Renaissance as well. Much like the urban legends of today, the bestiary stories were mostly false, but with some true stories mixed in as well. You can get a wonderful sense of the bestiary tradition from the Medieval Bestiary website, which also contains a lavish collection of illustrations.

The distich for today, which I found in the animal emblems of Joachim Camerarius (1534-1598), is based on a famous bestiary legend about the tiger. The story is about a sneaky trick that hunters would use in order to capture baby tigers. After the hunter snatched the baby tiger, he would ride away on his horse, with the mother tiger in fast pursuit, of course. To fool the tiger, the hunter would throw a round glass ball into the path of the tiger. The tiger, seeing herself reflected in the glass ball, would mistake the small image as being one of her cubs. She would then stop and fondle the glass ball, allowing the hunter to get away.

This legend about the tiger (patently absurd, but widely repeated for hundreds of years) allows Camerarius to make a general observation about human behavior and our tendency to self-deception, as you can see already in the title of the poem: Fallit Imágo Sui.

Fallit. This is from the Latin verb fallere, to fool, deceive, trick (compare the English words fallible and fallacy). The form is third-person singular: fallit, something tricks, something is deceptive.

Imágo. This is from the Latin noun imago, meaning image, likeness, representation. The form is nominative, giving us the subject of the verb: fallit imágo, the image fools, the image deceives.

Sui. This is from the Latin reflexive pronoun which means himself, herself, itself, yourself, etc. (the specific reference depends on context). The form is genitive singular, so imágo sui means one's own image, your own image, anybody's own image. Put the title all together and you have fallit imago sui, you are fooled by your own image. That is indeed what is going to happen to our poor tiger, as you will see in the poem!

Ambígua. This is from the Latin adjective ambiguus (compare the English word ambiguous) which means, literally, going both ways (compare the prefix ambi- in the English words ambivalent and ambidextrous). The form here could be feminine singular or neuter plural; we will have to read on to find out more.

splendens. This Latin adjective means shining, splendid, brilliant. The form could be masculine or feminine or neuter, so we need to keep reading to find out just what to do with this adjective also.

nos fallit. This gives us our verb phrase: nos is the Latin first-person plural pronoun, meaning us, and we saw fallit already in the title, from the verb fallere, third-person singular: nos fallit, something fools us, something deceives us. Now we just need a noun to be our subject, along with another noun to go with the other adjective.

imágine. We saw the noun imágo already in the title. The form imágine is ablative, so it means by means of an image: something fools us, nos fallit, by means of an image, imágine. We can also include one of our earlier adjectives here: ambígua can be feminine ablative, so that gives us an ablative noun phrase: ambígua imágine, an ambiguous image, one that is both real and not-real.

Meanwhile, notice how elegantly the two noun phrases are interwoven into the line: Ambígua splendens nos fallit imágine forma. This kind of word order is simply not possible in English but it comes very naturally in Latin.

So, the poem opens with a general statement about how appearances, attractive appearances in particular, splendens forma, can deceive us, nos fallit, with an ambiguous image, ambígua imágine, a representation that is both real and illusory. The second line will explain how the story of the tiger demonstrates precisely this problem:

Fállitur. This is from the verb we saw earlier, now in the passive form: fállitur, someone is fooled, someone is deceived. We need to read on to find out more.

ut. This tiny Latin word is used to introduce a comparison or simile - the first line is about something that fools us, fallit nos, just as, ut, somebody else is fooled: fállitur. We need to keep reading to find the subject of the verb.

vítreo. This is from the Latin adjective vítreus, meaning something that is made of glass (as in the English word vitreous). The form is masculine or neuter, dative or ablative; we will need to keep reading to find out how it fits in.

tigris. This is the Latin word for tiger, and it is in the nominative form, giving us the subject of the verb: fállitur ut tigris, we are fooled just as the tiger is fooled.

acérba. This is from the Latin adjective acerbus, meaning harsh, bitter, sad. The form is feminine, agreeing with the tiger: tigris acérba, the bitter tiger. Of course, if the tiger knows her cub has been stolen, she is bound to be bitter about that!

globo. This is from the Latin noun globus, meaning a ball, sphere, globe. The form is ablative, and it agrees with the adjective vítreo which we saw earlier: vítreo globo, by means of the glass ball: the tiger is fooled by the glass ball, vítreo globo.

So, that gives us the comparison to the tiger and her sad story. We are fooled by a shining and splendid appearance just as the sad tiger is fooled, fállitur ut tigris acérba, by the ball of glass, vítreo globo, in which she sees her own reflection. Now you can put the two lines together:

You can see the tiger looking at herself in the glass ball below, which is the emblematic image that accompanies Camerarius' poem: 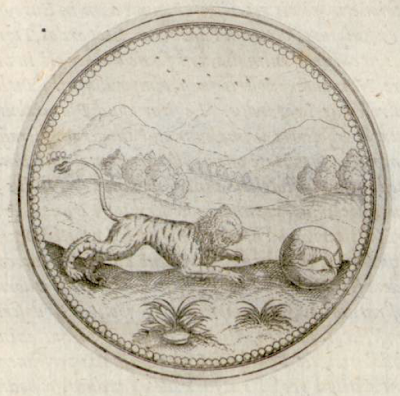 Here is another depiction of the story of the tiger, this time showing the human hunter (more information here): 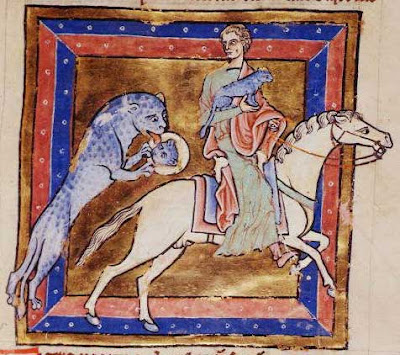 For more of Camerarius's poems in Latin, you can visit the Camerarius stream in my Latin distichs blog. As I add new English essays, you will be able to find those in the English stream at the blog. The next essay is about a lion: Iram Prudentia Vincit.
Posted by Laura Gibbs at 5:05 PM

Email ThisBlogThis!Share to TwitterShare to FacebookShare to Pinterest
Labels: Camerarius, English, GPlusNo, Illustrated: Emblems, Latin Without Latin
Newer Post Older Post Home
Welcome to the companion website for my latest book, Brevissima: 1001 Tiny Latin Poems. I hope you will enjoy browsing the site! Here is an INDEX PAGE with links to all 1001 poems. You can get a printed copy of the book from Lulu.com and/or you can download a complete PDF copy for free here. I'm also keeping an errata list here; if you notice anything I should add to the list, let me know.