This is my twenty-ninth "Latin without Latin" essay. For background and a link to other essays, see this page: About the English Essays. Since we are enjoying a wonderful summer day here where I live, I thought I would include something about the seaons of the year; this little poem is by Johan Glandorp (1555-1612).

The title of the poem is Partes Anni:

Partes. This is from the Latin noun pars, meaning part. The form is plural: partes, parts (what we would call the seasons).

Anni. This is from the Latin noun annus, meaning year (compare the English word annual). The form is genitive singular: anni, of the year. Put the two together and you have a complete phrase: Partes Anni, the parts of the year.

And here is the poem:

As you would expect, the four seasons are divided neatly between the two lines of the poem! Here's how it works:

Ver. This is the Latin word for spring (compare the vernal equinox in English; compare also the Italian primavera).

praebet. This is from the Latin verb praebere, meaning to offer. The form is third-person singular, with ver, spring, as the subject: ver praebet, the spring offers… what? We will need to keep reading on for the subject.

flores. This is from the Latin noun flos, meaning flower (compare the English word floral). The form is accusative plural, giving us a complete statement: ver praebet flores, spring brings flowers. Now we can move on to summer!

aestas. This is the Latin word for summer (there is an obscure English verb, estivate, which means to spend the summer somewhere). In Latin, the word for summer, aestas, is related to the word for seething heat, aestus. If you have ever spent a summer in Rome, you know why!

fert. This is from the Latin verb ferre, meaning to bear, to carry (as found in many compounds: refer, infer, defer, prefer, etc.). So, again we have a subject and verb: aestas fert… but what? We need to read on for the object.

tórrida. This is from the Latin adjective torridus, meaning hot, dry, parched (compare the English word torrid); it is feminine singular in form, agreeing with aestas; notice how the noun phrase, aestas torrida, the hot summer, wraps nicely around the verb: aestas fert torrida. But we are still waiting for our object!

messem. This is from the Latin noun messis, meaning harvest. The form is accusative, giving us the object of our verb: aestas fert tórrida messem, the hot summer brings the harvest.

So, that gives us spring and summer - now we can move on to fall and winter:

Vina. This is from the Latin word vinum, meaning wine; the form is plural: vina, wines. This time, we have the gift of the season presented before the season itself, an inversion of the pattern in the first line.

dat. This is from the Latin verb dare, meaning to give (so the English word data refers to things that are given). The form is third-person singular: vina dat, it gives wines - but we are still waiting on the subject.

autúmnus. This is the Latin word for autumn, the fall season: vina dat autúmnus, autumn gives wines (as you can see, Latin has free word order, unlike English; the subject can come just as easily after the verb as before it).

frígida. This is from the Latin adjective frígidus, meaning cold (compare the English word frigid). The form could be neuter or feminine; we will have to read on to find out more.

bruma. This is a Latin word that means winter. It's actually a contraction: it stands for brevissima (dies), the shortest day of the year, the briefest day of the year, i.e. the winter solstice. By metaphorical extension, the word bruma came to mean winter itself. The noun is feminine, so now we know what to do with that adjective: frígida bruma, the cold winter.

nives. This is from the Latin word nix, meaning snow. The form is plural: nives, snows, snowstorms. So, we have an accusative noun, which fits nicely the nominative noun phrase, frígida bruma, as the subject … but what about a verb? Since no verb is provided, we need to borrow the verb from the first half of the line: frígida bruma (dat) nives, the cold winter gives us snow, just as the autumn gives us wine, vina dat autúmnus.

So, put it all together and you have the succession of the seasons, one after another: ver, spring, and then aestas, summer, followed by autúmnus, and finally bruma, winter, when the days of the year are at their shortest and coldest... and then the cycle starts up again with spring:

Just speaking for myself, summer is my favorite season - if only because I actually have time to do Latin in the summer. Meanwhile, for more of these essays (I hope to add a new one every day this summer), see the English stream at the blog. The next poem is a natural history legend about a mother tiger and her cub: Fallit Imago Sui. 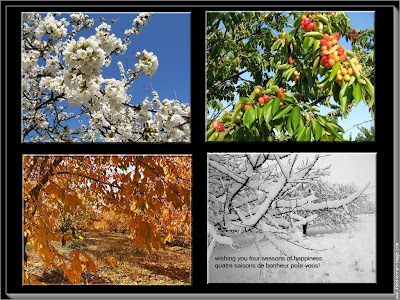 Email ThisBlogThis!Share to TwitterShare to FacebookShare to Pinterest
Labels: English, GPlusNo, Illustrated, Latin Without Latin
Newer Post Older Post Home
Welcome to the companion website for my latest book, Brevissima: 1001 Tiny Latin Poems. I hope you will enjoy browsing the site! Here is an INDEX PAGE with links to all 1001 poems. You can get a printed copy of the book from Lulu.com and/or you can download a complete PDF copy for free here. I'm also keeping an errata list here; if you notice anything I should add to the list, let me know.