This is my twenty-fifth "Latin without Latin" essay. For background and a link to other essays, see this page: About the English Essays. I wanted to do a poem today that had some reference to classical mythology, so I chose a poem by John Dunbar (c. 1585 - 1626), a Scottish neo-Latin poet. You can read more about Dunbar at Dana Sutton's online edition of Dunbar's epigrammatic poetry.

The poem I have chosen is an example of encomiastic epigram, the short poem of praise, which a poet might address to a friend or a patron. Dunbar addresses this little epigram to the great English jurist Edward Coke (1552-1634). You can read about Coke's adventurous and influential career at Wikipedia. Dunbar praises Coke for his just pronouncements, his powers of persuasion, as well as his knowledge and wisdom, using three goddesses to personify these traits. Here is the poem:

Let's see how it works!

Os. This is the Latin word for mouth (from the actual noun stem, or- instead of os, we get the word oral). The form could be nominative (giving us the subject of the verb) or accusative (giving us the object); we will need to read on to find out which it is.

Thémidis. This is from Themis, the name of the Greek god of justice and divine law; the form is genitive singular, which gives us a complete phrase: os Thémidis, the mouth of Themis, the mouth of justice. You can read Jane Ellen Harrison's classic treatise on Themis, Themis: A Study of the Social Origins of Greek Religion, online at the University of Chicago.

linguam. This is from the Latin word lingua, meaning tongue (compare the English words linguistic and language). The form is accusative, letting us know that we have here the object of a verb; this also lets us know that os was in the accusative also: Os Thémidis, Suadae linguam, the mouth of Themis and the tongue of persuasion - two accusative nouns both waiting for a verb. Notice also the chiastic word order, a bit of criss-cross elegance in the opening words of the poem: the first phrase was noun-goddess (os-Thémidis) while the second phrase is goddess-noun (Suadae-linguam).

mentémque. The -que stuck on to the end of the word means and, while mentem is the accusative form of the Latin noun mens, meaning mind (compare the English word mental). So, we have yet another object for our verb - os, linguam, and mentem - mouth, tongue, and mind.

Minérvae. Here we have the genitive form of Minerva, the name of the Roman goddess of wisdom, equivalent to the Greek Athena: mentémque Minérvae, the mind of Minerva. The first part of the line featured the criss-cross word order and here in the end of the line we have a bit of alliteration, m-m: mentémque Minérvae. Even while the poem is in praise of Coke, the poet is not shy to show off his own talents as well as he describes the three goddesses and their domains.

Divum. This is a form of the Latin adjective divus, meaning divine; it is a special form often used for the genitive plural of the word deus, meaning god, so divum means of the divine ones, of the gods - or, in this particular context, of the goddesses.

dona. This is the plural form of the Latin noun donum, meaning gift (compare the English word donate). Note that we have here some more alliteration: divum-dona, the gifts of the goddesses.

vir. This is the Latin word for man (and it is at the root of the word virtue, which was a manly thing for the ancient Romans). It is the nominative form, so at last we have the subject for our verb… but we are still waiting on the verb!

licet unus. Here we have licet, which means although, and the word for one, unus (compare the English word unity). So this modifies the noun vir which we just saw: vir licet unus, although just one man. As often, it looks like the verb we need has been saved for the very last word of the poem!

habes. This is from the Latin verb habere, to have. It is the second-person singular form, habes, you have. So, Edward Coke, vir licet unus, although you are just one man, you have, habes, the gifts of all three of these goddess, divum dona trium, as specified in the first line of the poem.

The result is very elegant: three goddesses, as we learn in the first line, whose powers are embodied in a single man, as we learn in the second line - flattery that is both erudite and poetic! And, of course, a jurist like Sir Edward Coke would definitely benefit from the attentions of these goddesses in particular:

For an image, you can see the goddess Minerva below, with her emblematic owl, in an early 17th-century painting, roughly contemporary to Dunbar and Coke. I hope you enjoyed the poem, and as I add new English essays, you will be able to find those in the English stream at the blog. The next poem is about another Roman goddess, Spes (in English, Hope): Spes Alit Agricolas. 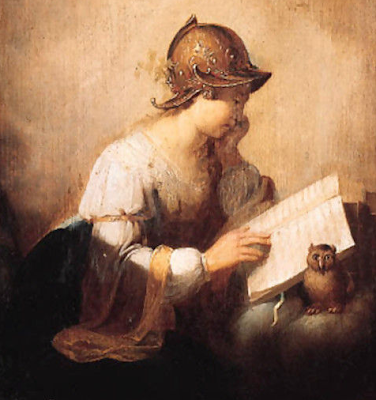 Email ThisBlogThis!Share to TwitterShare to FacebookShare to Pinterest
Labels: Dunbar, English, GPlusNo, Illustrated, Latin Without Latin
Newer Post Older Post Home
Welcome to the companion website for my latest book, Brevissima: 1001 Tiny Latin Poems. I hope you will enjoy browsing the site! Here is an INDEX PAGE with links to all 1001 poems. You can get a printed copy of the book from Lulu.com and/or you can download a complete PDF copy for free here. I'm also keeping an errata list here; if you notice anything I should add to the list, let me know.