This is my twenty-sixth "Latin without Latin" essay. For background and a link to other essays, see this page: About the English Essays. Yesterday's poem invoked an allegorical goddess, Suada, who was Persuasion personified. Today's poem is about another allegorical goddess: Spes, who is Hope personified. This is another one of the Latin emblems of Gabriel Rollenhagen (1583-1619). You can read more about Rollenghagen and his influential work in this blog post.

Here is the poem:

Spes. This is the Latin word for hope. It is in the nominative form, so we know it will be the subject of the sentence. (From the corresponding verb in Latin, sperare, meaning to hope, we get the English word desperation, which refers to losing hope, de-speration.)

alit. This is from the Latin verb alere, meaning to feed, nourish, support (as in the English word alimony). The form is third-person singular, with Spes as the subject: Spes alit, Hope nourishes… but what does she nourish? We need to read on for the object.

agrícolas. This is from the Latin word agricola, meaning farmer (the man who cultivates the ager, the field; compare the English word agriculture). The form is accusative plural, which gives us the object of our verb: Spes alit agrícolas, Hope feeds the farmers. These first three words of the poem - Spes alit agrícolas - are a Latin proverb in their own right (you can find the sentiment already in the classical Roman poet Tibullus).

messis. This is from the Latin word for harvest, messis, in the genitive form: of the harvest. We will have to read on to figure out how the genitive fits into the sentence overall.

Dea certa. Here we have the Latin word for goddess, Dea, along with an adjective, certa, meaning sure, certain. So, Spes, Hope, is a sure goddess, a goddess of whom you can be certain. (Of course, not all poets regard Hope as such a sure thing, but she is surely less fickle than the goddess Fortuna, of course, whose wheel spins up and down with no certainty at all.) We can combine this phrase, Dea certa, with the preceding word, messis, to get a noun phrase: messis Dea certa, the sure Goddess of the harvest.

So, that gives us our first line, describing the goddess Spes, Hope, and her importance for farmers. The second line will push us to think about the harvest in more metaphorical terms:

illa. This is from the Latin pronominal adjective ille, meaning that one or, more simply, he. The form is feminine singular, illa, meaning she - Hope - as the noun Spes is a feminine noun in Latin.

iubet. This is from the Latin verb iubere meaning to command, to order. The form is third-person singular: illa iubet, she commands, she orders. We need some kind of infinitive to let us know just what she is ordering us to do!

fidae. This is from the Latin adjective fidus, meaning faithful, trusthworthy (you can see the same root in the English use of the word affidavit). The form here could be dative or genitive; we are going to have to keep reading to find out how this word fits in overall.

crédere. Here is the infinitive we were looking for! The Latin verb crédere means to believe, to trust (compare the English words creed and credit). So, Hope orders us to have faith, to put our trust in something: illa iubet crédere. Even better, the verb crédere can take both an accusative complement - you entrust something - as well as a dative complement - you entrust something TO someone. We have a dative adjective, fidae, as a complement to the infinitive, but we still need a noun to go with that, and we also still need an accusative object for the infinitive, too!

semen. This is the Latin word for seed (and of course it also gives us the English word semen) and it gives us the accusative object we need for our infinitive crédere: Hope commands us, illa iubet, to entrust the seed, crédere semen, to the faithful something, fidae… but what is that faithful feminine something? We need the last word of the poem to complete the idea.

humo. This is from the Latin word humus, meaning earth, ground, soil (compare the English words inhume and exhume). The form humo is dative and - don't let the final -o fool you - the noun is feminine in gender, so it goes with fidae. Notice how the resulting dative noun phrase, fidae humo, to the faithful soil, elegantly wraps around the verbal phrase, crédere semen, entrust the seed. This wonderful style of word order is basically impossible to render in English, alas.

So, that gives us the complete poem: Spes alit agrícolas, Hope feeds the farmers, as she is the sure Goddess of the future harvest, messis Dea certa futúrae; and she commands us, illa iubet, to entrust our seed to the faithful soil, fidae crédere semen humo. You can take that literally as you plant your garden… or you can take that metaphorically as you sow the seed now for any harvest you hope to reap in future time.

In Rollenhagen's emblem, you can see Spes with a plow and she also holds an anchor, which is a traditional symbol of hope. The anchor, in fact, is what allows you to recognize immediately that this is Spes (Hope) rather than, say, the goddess Ceres, the actual goddess of agriculture; Spes carries an anchor, but Ceres does not. In the sky, you can see the light of the sun shining down on the field - and metaphorically, that light is a symbol of divine favor, as shown by the Hebrew letters inscribed on the sun, YHWH, also known as the tetragrammaton, which is one of the names of God. 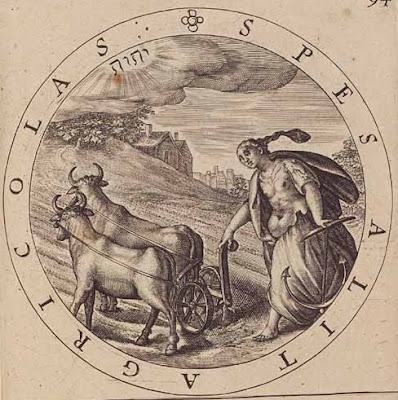 There is a famous edition of Rollenhagen's emblems in English by the 17th-century English poet, George Wither. Here is how he renders this distich in English:

The Husbandman, doth sowthe Seeds
And, then, on Hope, till Harvest, feeds.

For more of Rollenhagen's poems in Latin, you can visit the Rollenhagen stream in my Latin distichs blog. Here is a link to the blog post for this specific poem. As I add new English essays, you will be able to find those in the English stream at the blog. The next poem, far more cynical and pessimistic, is by the Roman poet Martial: Semper Pauper Es.
Posted by Laura Gibbs at 4:15 PM

Email ThisBlogThis!Share to TwitterShare to FacebookShare to Pinterest
Labels: English, GPlusNo, Illustrated: Emblems, Latin Without Latin, Rollenhagen
Newer Post Older Post Home
Welcome to the companion website for my latest book, Brevissima: 1001 Tiny Latin Poems. I hope you will enjoy browsing the site! Here is an INDEX PAGE with links to all 1001 poems. You can get a printed copy of the book from Lulu.com and/or you can download a complete PDF copy for free here. I'm also keeping an errata list here; if you notice anything I should add to the list, let me know.