Taurus. This is the Latin word for bull (and the Latin name is still used in the zodiac). Jupiter became a bull in order to seduce Europa, as you saw in the illustration to yesterday's essay.

olor. This is the Latin word for swan. Jupiter became a swan in order to seduce Leda - which is how Helen of Troy was born! For more, see Wikipedia.

satyrúsque. The -que at the end of this word means and, and sátyrus means satyr (the letter y gives you a clue that the word is Greek in origin, borrowed by the Romans). Jupiter became a satyr in order to seduce Antiope, a princess of Boeotia; the product of their union was Amphion, the famous musician who used his lyre to raise up the walls of Thebes. For more, see Wikipedia.

ob amórem. The Latin preposition ob means around, about, because of; the word amórem is from Latin amor, meaning love (compare the English word amorous). Put them together and you have a prepositional phrase: ob amórem, on account of love, because of love. So, now we know love is the force that drives these transformations of Zeus.

et. This little word means and. This means there is one more transformation to add to the list.

Iúpiter aurum est. With Iúpiter we have the subject of the sentence made explicit: Iúpiter, the god Jupiter, ruler of Mount Olympus (called Zeus by the Greeks). The verb est is from Latin esse, meaning to be (compare the English word essential); est is the third-person singular form, Iúpiter est, Jupiter is. The word aurum means gold (in Spanish, this becomes oro - as in the name of a high school I attended, Canyon del Oro = Gold Canyon). Jupiter turned himself into a shower of gold in order to gain access to princess Danae, who was imprisoned in a tower; their son was the Greek hero Perseus. You can find out more at Wikipedia.

So, the first line provides an inventory of some of the things Jupiter is willing to be to seduce the objects of his desire: a bull, a swan, a satyr and a shower of gold. The second line of the poem will give us the names of the lovers who moved him to these transformations. The women all have Greek names and More uses the Greek word endings to give us the genitive forms:

Európes. This is the Greek genitive singular form of the name Europa: Európes, of Europa. So, for love of Europa, ob amórem Európes, Jupiter is a bull, Iúpiter taurus est.

Ledes. This is the Greek genitive singular form of the name Leda. So, for love of Leda, ob amórem Ledes, Jupiter is a swan, Iúpiter olor est.

Antíopes. This is the Greek genitive singular form of the name Antiope. So, for love of Antiope, ob amórem Antíopes, Jupiter is a satyr, Iúpiter sátyrus est.

Dánaes. This is the Greek genitive singular form of the name Danae. So, for love of Danae, ob amórem Dánaes, Jupiter is gold, Iúpiter aurum est.

Notice that the names of the women in the second line follow in order the transformations of Jupiter in the first line: very elegant!

Thomas More's poem is a Latin imitation of an anonymous item in the Greek Anthology; here is the Greek:

All four of these stories have inspired a tremendous number of paintings and sculptures; as an illustration, I decided to choose the famous painting by Klimt of Danae and the Shower of Gold.
For more of Thomas More, check out the Thomas More stream at the Disticha blog. In addition, you can find all the English essays in the English stream at the blog. 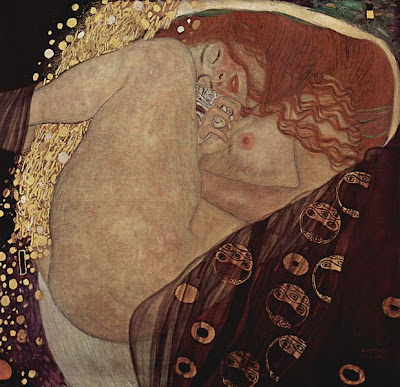 Email ThisBlogThis!Share to TwitterShare to FacebookShare to Pinterest
Labels: English, GPlusNo, Greek, Illustrated, Latin Without Latin, More
Newer Post Older Post Home
Welcome to the companion website for my latest book, Brevissima: 1001 Tiny Latin Poems. I hope you will enjoy browsing the site! Here is an INDEX PAGE with links to all 1001 poems. You can get a printed copy of the book from Lulu.com and/or you can download a complete PDF copy for free here. I'm also keeping an errata list here; if you notice anything I should add to the list, let me know.