Latin Without Latin: Procul a Iove

This is my fortieth "Latin without Latin" essay. For background and a link to other essays, see this page: About the English Essays. I thought I would do another poem about Jupiter today, this time about how he poses a danger to everyone, not just to women whom he fancies, as in yesterday's poem. Today's poem is from the emblems of Nikolaus Reusner, Aureolorum Emblematum Liber, published in 1587, which you can see online at the University of Mannheim's CAMENA project. This poem is emblem 79 in Reusner's collection:

A Iove. This is the Latin preposition a, meaning from, and the ablative form, Iove, of the noun Iupiter, the name of the god Jupiter (called Zeus by the Greeks). Put them together and you have a prepositional phrase: A Iove, from Jupiter. (You can also see now how we have both Jupiter and Jove as names for the ruling god of Mount Olympus: the Latin nominative form give us Jupiter, but the word stem from which the other forms are created gives us Jove.)

sis. This is a form of the Latin verb esse, meaning to be (compare the English word essential). This is the second-person singular form in the subjunctive mood, expressing a hypothetical possibility, something you should or must be: sis, you should be.

móneo. This is form of the Latin verb monere, meaning to warn or advise (you can see the mon- root in the English words admonition, premonition, etc.). The form is first-person singular in the indicative mood this time: móneo, I warn.

procul. This is a Latin adverb that means far from (compare the name of the rock band, Procul Harum). Put it all together and you have a complete statement: móneo, I warn you, sis, that you should be, a Iove procul, far away from Jupiter. In other words: keep away from Jupiter!

atque. This Latin word means and, so we are going to get a second warning.

a fúlmine. This is the preposition a again, this time with the ablative form, fúlmine, of the noun fulmen, which means a lightning bolt, a thunderbolt, something with great destructive power (compare the English word fulminate). So, the warning is to keep far away from Jupiter, a Iove procul, and to keep far away from his lightning bolt, a fúlmine. (Jupiter was the god of weather, and of stormy weather in particular.)

So, that gives us our first sentence: I warn you to keep far away, sis móneo procul, from Jupiter and from his lightning bolt, a Iove atque a fúlmine. Notice how elegantly the two prepositional phrases wrap around the sentence at the beginning and at the end: A Iove sis, móneo, procul, atque a fúlmine.

Now let's see what the second part of the poem tells us by way of explanation:

saevum fulmen. Here we have the thunderbolt again, fulmen, and this time it is described with an adjective: saevum, meaning fierce, ferocious, raging (compare the English word savage). As this noun phrase is neuter, we do not know yet if it will be the subject or the object of the coming verb.

quam (…ante). The next word in the sentence is quam, which can be used to introduce all kinds of subordinate clauses. In this sentence, it is going to be a temporal subordinate clause; the word quam is paired with the word ante coming later in the line meaning before (compare the English words antechamber, anteroom, etc.). So, we are going to have a subordinate clause here which expresses the after part of a before-and-after statement.

fulgur. This is a noun meaning a flash, something bright or splendid (you can see the fulg- root in English words like effulgent, refulgent). This is another neuter noun, so we do not know yet if it is the subject or object of a verb.

prómicat. This is from the Latin verb promicáre, meaning to burst forth, to gleam. The form is third-person singular: prómicat, it bursts forth, it gleams. The word fulgur gives us the subject of the verb: fulgur prómicat, the flash of the lightning gleams. So, something happens before we see the lightning with our eyes; we need one more verb to tie it all together.

The second part of the poem thus provides an explanation for the advice given in the first part: I warn you to stay far away, sis móneo procul, from Jupiter and from his lightning bolt, a Iove atque a fúlmine. Why? Here's why: saevum fulmen ante ferit, that fierce lightning bolt can strike before you even see the lightning gleam, quam fulgur prómicat. In other words, you don't have time to get out of the way: once you see the lightning flash, Jupiter has already hurled the thunderbolt. To apply the metaphor to a down-to-earth context: stay away from your boss if he has a stormy temper. By the time you see the glint of anger flash in his eyes, it is too late! You should just stay out of his office entirely, and as far away his anger as possible.

Reusner's poem was itself inspired by a Latin proverb, Procul a Iove, procul a fulmine (Far from Jupiter, far from the lightning bolt), which you can also find in Greek: πόρρω Διός τε και κεραυνού. I really like the odd illustration in the emblem here: you can see the man using some kind of gigantic book to try to protect himself from the blasts of the storm!

For more essays, see the English stream at the Disticha Latina blog. The next poem is also about the power of Jupiter to strike from a distance: Si Sciens Fallo. 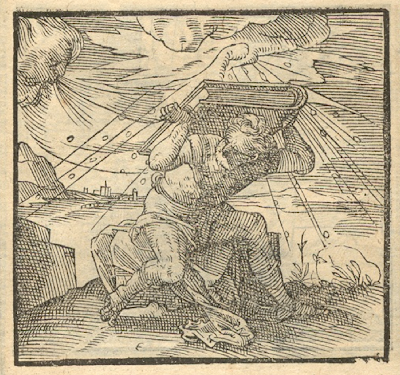 Email ThisBlogThis!Share to TwitterShare to FacebookShare to Pinterest
Labels: English, GPlusNo, Illustrated: Emblems, Latin Without Latin, Reusner
Newer Post Older Post Home
Welcome to the companion website for my latest book, Brevissima: 1001 Tiny Latin Poems. I hope you will enjoy browsing the site! Here is an INDEX PAGE with links to all 1001 poems. You can get a printed copy of the book from Lulu.com and/or you can download a complete PDF copy for free here. I'm also keeping an errata list here; if you notice anything I should add to the list, let me know.