This is my fiftieth "Latin without Latin" essay. For background and a link to other essays, see this page: About the English Essays. I thought I would follow up yesterday's poem about the apple tree in the Garden of Eden, with another poem that includes a tree; this poem again comes from John Owen, and it is entitled Ad Calvum.

Ad. This Latin preposition means to, toward (you can see this in many English compounds such as admit, advent, etc.).

Calvum. This is from the Latin adjective calvus, meaning bald (compare the Bible word Calvary, "the place of the skull" - a skull being profoundly bald, of course). The gender is masculine and the case is accusative, as required by the preposition: Ad Calvum, To a Bald Man.

Here is the poem:

Arbóribus. This is from the Latin noun arbor, meaning tree (as in Arbor Day). The form is either ablative plural, by the trees, or dative plural, to the trees - we will have to keep reading to find out which.

rédeunt. This is from the Latin verb redíre, to come back, return, and the form is third-person plural: rédeunt, they come back, they return. The dative fits nicely here, too: arbóribus rédeunt, they return to the trees. But who, or what, are they? We will have to keep reading to find our subject.

crines. This is from the Latin word crinis, meaning hair, but also meaning things that look like hair, like the tail of a comet, foliage of trees, etc. (compare the English word crinoline). The form is plural: crines, hairs. The case is nominative, giving us the subject of the sentence: arbóribus rédeunt crines, the leaves return to the trees.

grámina. This is from the Latin noun gramen, meaning grass (compare the English word graminivorous, grass-eater). The form is plural, grámina, grasses (although in English, we usually do not use the word grass in the plural). As this is a neuter noun, the case could be either nominative or accusative; we need to keep reading to find out.

campis. This is from the Latin noun campus, meaning field. The form is dative plural, so we have a new statement that parallels the first statement, borrowing the same verb: campis (rédeunt) grámina, the grass returns to the fields. Note the elegant chiastic structure: in the first statement, the dative complement came first and was followed by the subject (arbóribus rédeunt crines), while in the second statement, the subject is first, and the dative complement comes second (campis ... grámina).

The first line thus gives a picture of the eternal renewal of nature, with the leaves returning to the trees each spring, arbóribus rédeunt crines, and the grass returning to the fields, et grámina campis. In the second line, alas, we will find that things are not so for the bald man:

At. This little Latin word means but.

cápiti. This is from the Latin noun caput, meaning head (as in English words like captain and decapitate, and also in the Latin phrase per capita). The form is dative: cápiti, to the head.

non rediére. The verb rediére is a perfect form of redíre, to return; the form is third-person plural, negative: non rediére, they have not come back. The subject would be the frondes, and the dative cápiti fits perfectly again: cápiti frondes non rediére, the leaves have not returned to the head. Whose head? Read on!

tuo. This is from the Latin adjective tuus, meaning your (you, singular). The form is dative, agreeing with cápiti, with tuo in a very emphatic position at the end of the statement: cápiti frondes non rediére tuo, the leaves have not returned to YOUR head.

So, put it all together, and you have a witty and sharp-tongued rebuke directed at a bald man whose hair will never grow again, no matter how many years may pass:

Students of Latin will hear an echo here of Horace's famous ode - Diffugere nives, redeunt iam gramina campis / arboribusque comae - and thanks to blog reader Arcady7, here is a nice version with both Latin and English:  Horace, Odes 4.7.

For more of Owen's poems in Latin, you can visit the Owen stream in my Latin distichs blog, and as I add new English essays, you will be able to find those in the English stream at the blog. The next poem is also about a bald man: Laudo Capillos. 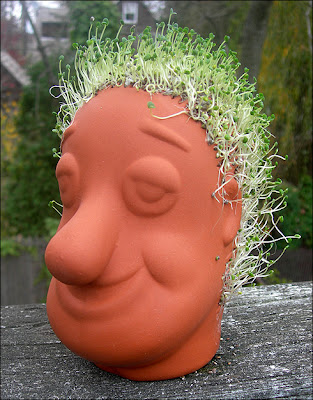