This is my forty-ninth "Latin without Latin" essay. For background and a link to other essays, see this page: About the English Essays. I've done some mythological poems previously (most recently, Pasiphae), and there are also some distichs which use characters from Bible stories. Adam, in particular, appears frequently! This little poem by Owen, plays with a famous pun in Latin: mālum (with a long "a" vowel) means "apple" (so malic acid is obtained from apples), but mălum (with a short "a" vowel) means "evil" (as in English words like malicious, malevolent, etc.). The title of Owen's poem is Fructus Véritus:

Fructus. This is the Latin word for fruit.

Véritus. This Latin word means dreaded, feared. So, that gives us the title of the poem: Fructus Véritus, The Dreaded Fruit.

The fruit, of course, will be the apple:

Nudus Adam. Here we have Adam, along with the adjective nudus, meaning naked, nude. The noun phrase is in the nominative case, giving us the subject of our verb: nudus Adam, naked Adam.

vétita. The Latin participle vétitus means forbidden (it is from the Latin verb veto, which we use in English). The form vétita is feminine ablative singular - from or by something forbidden in the feminine gender. We will have to wait for a noun to go with the participle!

quod vulsit. The verb vulsit is from vellere, meaning to pluck or to tear (it is related to the English revulsion, in the sense of tearing yourself away from something, pulling away). We already have our subject: nudus Adam, so we can put that together in a statement: nudus Adam vulsit, naked Adam plucked. The little word quod is a relative pronoun in the neuter case, meaning that which: quod nudus Adam vulsit, that which naked Adam plucked. We will need a referent for the pronoun to figure out just what he plucked.

ab árbore. The Latin preposition ab means from, and we have here the ablative form, árbore, of the word for tree, arbor (as in English Arbor Day). The result is a prepositional phrase: ab árbore, from the tree. The word arbor is feminine in gender, so that our adjective fits here too: vétita ab árbore, from the forbidden tree.

mālum. Here is the neuter noun we were waiting for: mālum, the apple. This neuter gender lets us know that the relative pronoun quod refers to mālum, the apple. Now we will learn something about that apple in the main clause of the sentence.

haud fuit. The word fuit is the past tense of the verb esse, to be (compare the English word essential), and haud negates the verb: haud fuit, it was not. So, we now have a negative assertion: quod nudus Adam vulsit, that which naked Adam plucked, vétita ab árbore, from the forbidden tree, mālum haud fuit, was not an apple. Well, that is a surprise! If it was not an apple, what was it? We will need to keep reading to find out.

at. This Latin word means but. So, mālum haud fuit, it was not an apple, at, but… what? We have to keep reading.

origo. This is the Latin word for origin.

măli. Here we have the pun at the heart of the poem: mălum means evil, and here it is in the genitive form - măli, of evil. Put that with origo and you have a complete phrase: origo măli. (Compare also the English theological expression: original sin.)

So, the pun provides the clue to the meaning of Adam's story: that which naked Adam plucked,
Nudus Adam quod vulsit, from the forbidden tree, vétita ab árbore (note how the prepositional phrase wraps around the verb), was not an apple, mālum haud fuit, but something worse than an apple, at mālo peius; it was the origin of evil: origo măli.

Here is an English verse rendering by Thomas Harvey, but he is sadly unable to imitate the pun of apple and evil, mālum and mălum, which is the key feature of Owen's poem:

It was not sole an Apple, It was worse,
Adam bought Sins Original, the Curse.

For more of Owen's poems in Latin, you can visit the Owen stream in my Latin distichs blog, including the blog post for this specific poem. As I add new English essays, you will be able to find those in the English stream at the blog. The next poem is also by Owen and also involves a tree: Ad Calvum. 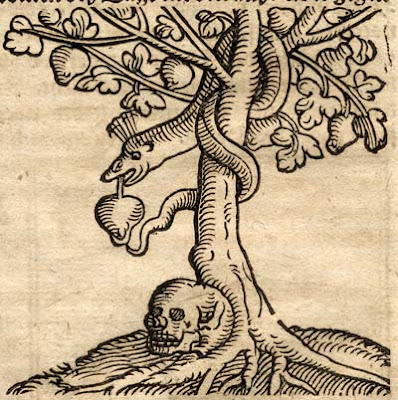