This is my thirty-fourth "Latin without Latin" essay. For background and a link to other essays, see this page: About the English Essays. After the bitter-sweet reflections about love from John Owen that I shared yesterday, I thought I would offer up here another John Owen love poem that is full of good feeling. He calls it Epistola Amatoria, an "amatory epistle" - A Love Letter. Here is the poem:

Here's how it works:

Nullus. This is the Latin adjective that means not any, none, no (compare the English words null and nullify). It is in the nominative case, masculine, so we know it refers to the subject of the sentence.

amor. This is the Latin noun for love (compare the English word amorous), and it agrees with our adjective nullus, giving us a complete statement: Nullus amor, There is no love (as often in Latin, the verb "to be" is omitted).

sine spe. The Latin preposition sine means without (you can see it in the word sinecure, meaning without care or obligation), and spe is the ablative form (required by the preposition) of the noun spes, meaning hope. (From the corresponding verb in Latin, sperare, meaning to hope, we get the English word desperation, which refers to losing hope, de-speration.). Put them together and you have a preposition phrase, sine spe, without hope, that fits in with the first statement: Nullus amor sine spe, There is no love without hope.

dúbius qua. Here we have the Latin relative pronoun, qui, in the ablative feminine form, qua, which lets us know that it is referring to spes, the feminine noun in the main clause: qua (spe), by means of which (hope). We also have the adjective dúbius meaning uncertain, unsure (compare the English word dubious). The adjective is in the nominative case, describing the subject of our verb - but we need the verb to figure out how it all fits together.

vivit. This is from the Latin verb vivere, meaning to live (compare the English words vivid and revive). It is the third-person singular form: vivit, he lives. Combine that with our previous adjective and you get dúbius vivit, he, uncertain, lives, i.e. he lives in a state of doubt. Now we need to get hope in there: dúbius qua (spe) vivit, he lives by means of said hope, but in a state of uncertainty. But who is he? We need an actual noun to identify our subject.

amátor. This is the Latin noun that means lover (compare the English adjective amatory). Now we have a complete statement: Nullus amor sine spe, there is no love without hope, on which hope, qua, the lover lives, vivit amátor - but in a state of uncertainty, dúbius.

So, the first line presents the lover as hopeful, but uncertain. In the second line, however, we will learn that there are two things of which the lover is sure:

Nulla. This is the feminine form of nullus, the adjective we saw above: not any, none. We need a feminine noun for it to agree with.

placet. This is from the Latin verb placére, meaning to please, to satisfy (compare the English words placate and placebo). The subject is nulla, not any (something), but we need to know more about our subject to see how it all fits together.

sine re. This is the preposition sine, without, and this time with the ablative form of the noun res, meaning thing, event, substance, reality (and yes, the English words real, really, reality, etc. come from Latin res). So, we have a prepositional phrase - sine re, without substance, without reality - but we are still waiting on a subject for the verb.

spes. Aha, we have the word for hope again. Nulla placet spes, No hope is pleasing … sine re, without substance.

mihi. This is the dative form of the Latin first-person pronoun, ego, I. The verb placet takes a dative complement, so this all fits together nicely: Nulla placet mihi spes, No hope is pleasing to me, mihi … sine re, without substance, without reality.

res sine te. The word res, thing, and sine, without, we have had already. The new word, te, is the ablative form of the second-person pronoun you, so that gives us a prepositional phrase, sine te, without you. Now, how can a noun, res, meaning thing, and a prepositional phrase, sine te, meaning without you, make a complete sentence? What we have here is a great example of Latin elliptical style - instead of repeating all the words, Latin just gives us the new words we need to complete the sentence, filling in the blanks from before: res sine te = (Nulla placet mihi) res sine te, which means: Not any thing, Nulla res, is pleasing to me, placet mihi, without you, sine te.

Isn't that charming? The lover may live in a state of doubt, surviving only on hope, but he knows that nothing pleases him without his beloved. Remember, Owen called this little poem a love letter, and a love letter it is, with his beloved waiting there at the end of the poem!

Here is an English verse rendering by Thomas Harvey. He is not able to achieve the elegant simplicity of Owen - but then it is almost impossible for English to match the elegance of Latin word order.

Love wants not Hope, in hope the Lover lives:
But Hope without thee-thine, me nothing gives.

For more of Owen's poems in Latin, you can visit the Owen stream in my Latin distichs blog. Here is the blog post for this specific poem. As I add new English essays, you will be able to find those in the English stream at the blog. The next essay is about a dangerous combination of night, love and wine: Nox et Amor Vinumque. 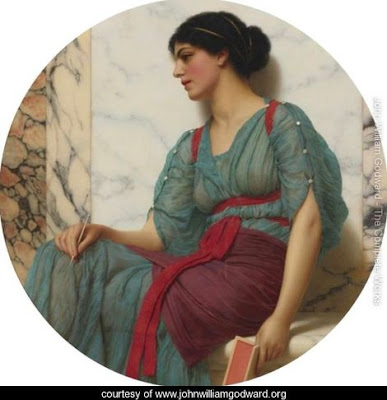