Source: John Owen (c.1564-c.1628), Epigrammata, 3.148. The English version is by Thomas Harvey. Meter: Elegiac. Note the contrast set up by bene/male, where in the first line the human actors are the subject of sequentur, while they are the object of the verb in the second line, with a nice chiasmus: illi sequentur || sequentur eos. The poem plays with the multiple senses of Latin sequi - follow in the sense of conform to, adhere to (in the case of the do-gooders) and follow in the sense of hound, persecute (in the case of the evil-doers).

The vocabulary is keyed to the DCC Latin Vocabulary list. All the words in this poem are on that list: 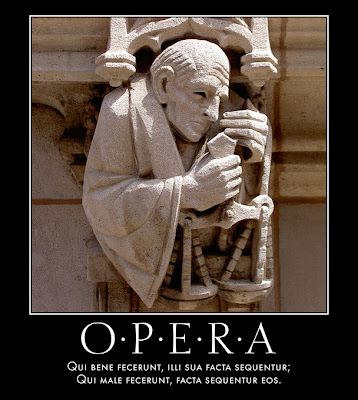 Email ThisBlogThis!Share to TwitterShare to FacebookShare to Pinterest
Labels: DCC0, engtrans, GPlusNo, Illustrated, Owen, pinned, poster
Newer Post Older Post Home
Welcome to the companion website for my latest book, Brevissima: 1001 Tiny Latin Poems. I hope you will enjoy browsing the site! Here is an INDEX PAGE with links to all 1001 poems. You can get a printed copy of the book from Lulu.com and/or you can download a complete PDF copy for free here. I'm also keeping an errata list here; if you notice anything I should add to the list, let me know.