Here is today's distich by John Owen, with an English translation by Thomas Harvey, 3.12. Owen dedicated this poem Ad nobilem Optimae Spei Adulescentem D. Thomam Puckering. Sir Thomas Puckering (1592-1636) was the son of Sir John Puckering; Owen addressed several poems to him. The epigram is about the famous "Choice of Heracles," where Heracles had to choose between Pleasure and Virtue. In Owen's poem, there is a playful contrast between the bivium, which Heracles had to choose between, and the famous trivium (grammar, logic, and rhetoric) and quadrivium (arithmetic, geometry, music, and astronomy) of the schooling tradition.

HERCULES BY-WAY.
Some in Quadruples, some in Triples erre:
Th’ Herculean Duple is most sinister.
Here is the vocabulary:

Hercules - Heracles, Hercules
bivium - crossroad, fork in road
sum - be, exist
qui - who, which, that
in - in
quadrivium - meeting of four roads
trivium - meeting of three roads
que - and
insigniter - conspicuously, notably
erro - be mistaken, err
maximus - greatest, biggest
error - mistake
insum - be in, be involved in 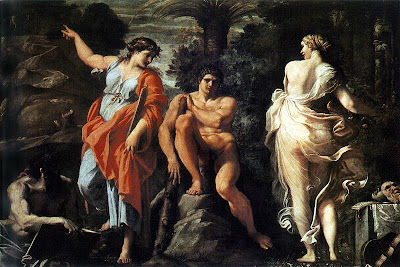 (Image: painting by Annibale Carracci)
Posted by Laura Gibbs at 12:01 AM